Home with a purpose

At the age of 78, Gopinath Patra of Inchudia in Balasore found a new family and a home in Banaprastha Bhawan.

BHUBANESWAR:  At the age of 78, Gopinath Patra of Inchudia in Balasore found a new family and a home in Banaprastha Bhawan.

Like others in the shelter home near Zilla School at Balasore town, he arrived at the facility after being asked to fend for himself by his son and daughter-in-law as they could not take care of him due to the financial crisis arising out of the Covid-19 pandemic.

His son used to work as a mason but lost his livelihood when the pandemic struck. A few months later, his daughter-in-law asked Gopinath to move out of their house. Helpless, he approached some locals for help who took him to Gobinda Dalai – founder of Banaprastha Bhawan and an NGO Yuva Vikas Foundation.

Dalai brought him to the facility where eight visually-challenged youths welcomed him with open arms. He has now settled in the new family that gives him the care and affection that he craved for. 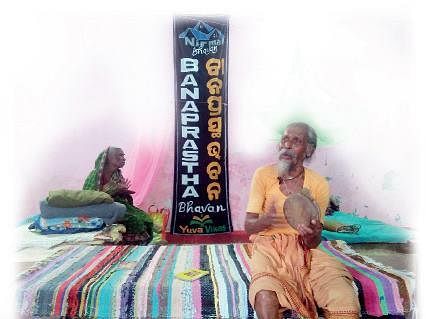 The Banaprastha Bhawan, however, is not just another old-age home to provide shelter to elderly persons, who are abandoned by their families. It is a unique symbol of empowerment of the deprived.

Currently home to five elderly persons and the visually-impaired youths along with 10 more senior citizen day boarders, the Bhawan which was established last year has given them a life of dignity, where they do not have to beg for love and food. The inmates themselves are the owners.

While the shelter home is entirely managed by the visually-challenged youths and Yuva Vikas Foundation volunteers, Good Samaritans contribute to keep the facility running.

“We at Yuva Vikas Foundation decided to open this shelter home after I saw a group of tribal blind boys begging and selling toys in trains. During my fieldwork in Balasore district, I had come across these boys in their school and it was disheartening to see them in that condition.

They were educated and willing to work but did not have employment. So when we decided to open this shelter home for senior citizens, I brought all of them here. They were happy to help us in running the shelter and taking care of the elderly residents for a monthly honorarium”, says Dalai, an alumni of Tata Institute of Social Sciences, who also runs a local store that sells handmade and organic products. Dalai says the daily expenditure of running the shelter is close to Rs 2,500.

“Half the expenses is met by the store proceeds and the rest 50 per cent comes from individual contributions,” he says.

There are activities galore at the shelter home to keep the inmates busy throughout the day. The blind youths are trained in various income-generating activities like vermi-composting, developing vegetable gardens and nurseries, farming besides, computer training, cooking, music and also yoga by the volunteers.

Similarly, elderly citizens, both residential and in day care, get to interact with each other, engage in productive works along with recreation, Dalai says.

At Banaprastha home, set up by social worker Gobinda Dalai, eight visually-challenged youths are providing elderly citizens the love and care that they were denied by their own children, writes Diana Sahu

Now we are on Telegram too. Follow us for updates
TAGS
Banaprastha Home Gobinda Dalai