This Is How He Shrunk The Veena

Grandson of veena maestro S Balachander, Baradwaj Raman has come up with a portable veena, which can be packed in a guitar case, and taken along by flight or train without fuss, unlike the normal veena

CHENNAI: Veena in a guitar case? While that might sound impossible for musicians and music enthusiasts alike, given the large size of the instrument — complete with a dome-shaped resonator, resting gourd and a dragon piece or yazhi among other parts — veena artiste Baradwaj Raman took it up as a challenge. After brainstorming for three years, the grandson of Veena maestro S Balachander, came up with a portable veena, which looks exactly like the normal one, without compromising on the acoustics, but can be hung around the shoulders in a guitar bag. 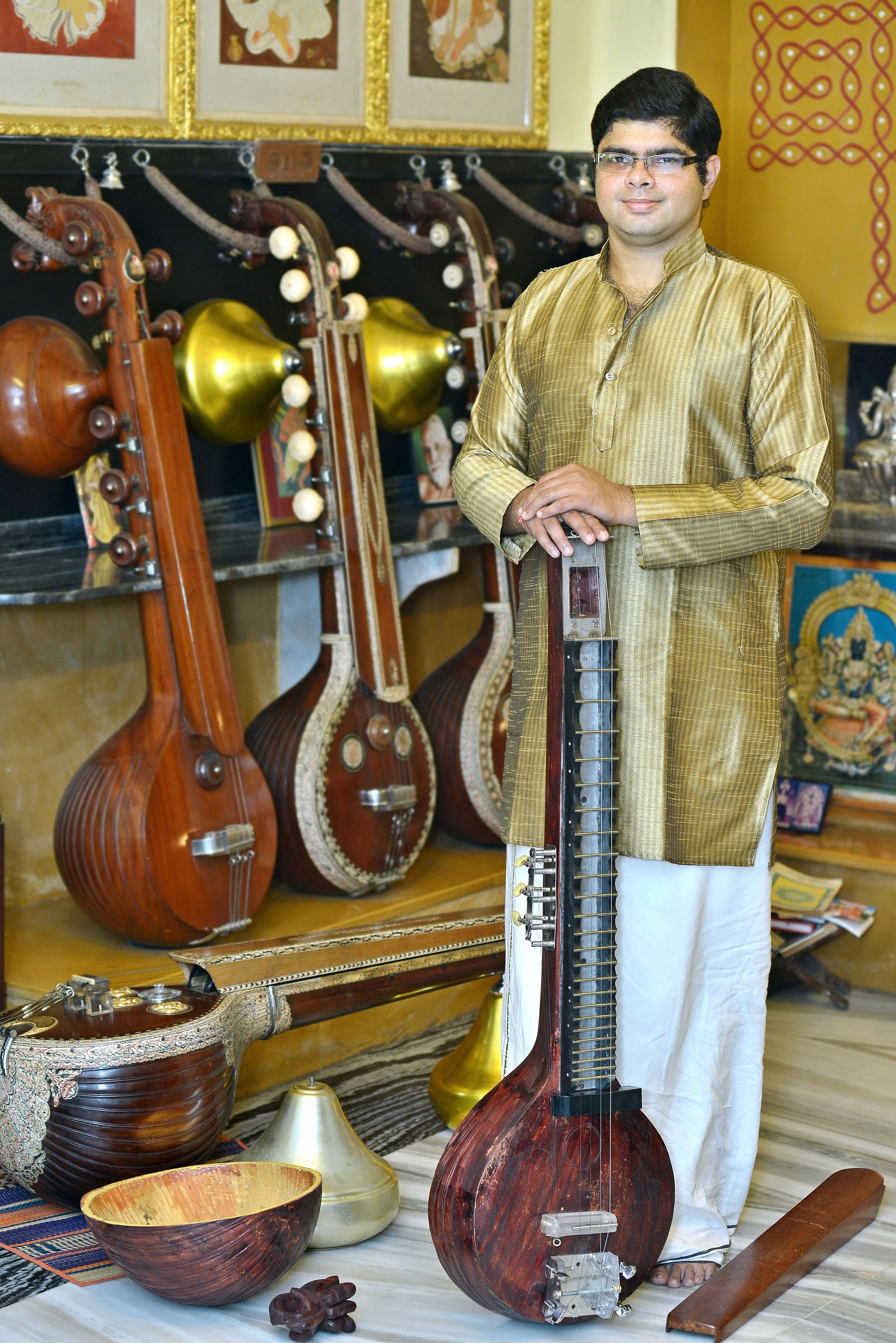 The germ of the idea was planted when Baradwaj was on his way for a concert in London, back in 2010. “I had to take the instrument along, and I found it very difficult. It is then that I took the decision to design the instrument such that it is easy enough for transportation,” he says. While that is the case for flights, in trains, he says the instrument, which is usually carried in a fibreglass box to prevent damage during the journey, had to be tied to one corner of the window and kept from rolling over. “But recently, I took my portable veena to Bengaluru for a concert in the Shatabdi, and I just had to keep it beside my seat in a guitar bag,” he says.  How did Baradwaj manage to shrink the veena? “I realised that there was a lot of unused area in the instrument. Since the ‘speaking length’ was the only usable area, I made some functional and cosmetic changes, and played around with the length without compromising on that part. Also, I made the lower half of the resonator and the whole resting gourd  removable pieces,” says Baradwaj, who also owns around eight rare veenas of his granddad which have gold and ivory work on them. While the normal veena is around seven kilograms, the portable veena is just around four, and takes far less time to manufacture.   “I played eight concerts using the portable veena during the December Margazhi season. I have applied for a patent, so officially I can sell them now,” says Baradwaj. Besides the size, another significant change which Baradwaj brought to the normal Veena is replacing the wax which is used to make the fretboard, with thermoplastic. “In the past, wax was used so that the artistes could adjust the metal frets that rest on it by melting the wax a bit without relying on the veena maker. However, the limitations of using wax is that it cracks at low temperatures and melts at high temperatures. By using thermoplastic, I need not retune and readjust any fret. Once set onto its place, it stays fixed like a guitar fret,” he says. “That apart, machine heads or tuning pegs of my veena can be removed comfortably without damaging any part of the wooden veena, unlike in the normal veena,” he adds.

The technical help came from his dad, who though a lawyer, is technically sound, he says. He recounts an incident during one of his grandfather’s concerts in Iraq. “While he was entering the lift of his hotel, the door closed before he could get the instrument in, and it broke. My dad, who accompanied by grandfather then, used metal and wood paste and repaired it in two hours, which I think was pretty amazing,” he says.