He Has Healing Powers and Wears Only Checked Cloth

Thiruvallur, nearly 50 km from Chennai on the road to Arakonam, is famous for a huge Vishnu temple dedicated to Veeraraghava Swami.

Thiruvallur, nearly 50 km from Chennai on the road to Arakonam, is famous for a huge Vishnu temple dedicated to Veeraraghava Swami. It is one of the 108 divya desams or temples praised by the Azhvars or Vaishnavite saints. It is the 22nd divya desam in Tondaimandalam or north Tamil Nadu and was visited by Thirumazhisai Azhvar and Thirumangai Azhvar.

One of the original names of this place was ‘Thiru Evvul’ which later became Thiruvallur. This is in connection with the tradition of the temple according to which an ardent devotee Salihotra Muni offered food to this deity who was disguised as an old man and the latter, wanting to rest, asked him which was the right place to sleep (Evvul). The main deity is Veeraraghava Swami in a reclining posture with one hand stretched towards Brahma as though explaining the pranava mantram to him. The other hand is pointing downwards with the palm placed on the head of Salihotra Maharishi as though blessing him. 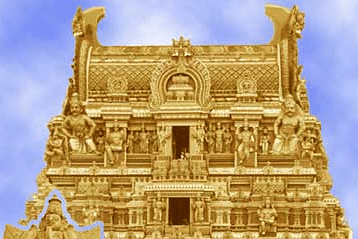 Veeraraghava Swami is also known as Evvul Kaathan and Vaidya Veeraraghavan as this deity is believed to have great healing powers. An interesting detail here is that this deity wears only checked clothes as this was offered by Salihotra Muni. Goddess Lakshmi here is worshipped as Kanakavalli Thayar and  the processional image (utsava murti) of Lakshmi is Vasumathi Thayar.

The temple has many inscriptions belonging to the Pallava, Chola and Vijayanagara times. The earliest of these epigraphs was found inscribed on a step leading to the tank and can be dated to the Pallava times of the 9th Century. It records an endowment for burning a sacred lamp and for feeding a person who cleaned the temple. Two annual festivals (brahmotsavam) each for ten days — one in the month of Thai and the other in Chittirai —  and two float-festivals  (in Ani and Masi) are held with fervour.

(The writer is a historian who focuses on temple architecture)