A date with disability

Coimbatore-based Swarga Foundation has brought out a new calendar with persons with disabilities (PwDs)as models,City Express talks to two of the ‘models’ who hail from the city, about their experience working on the trend-setting initiative

CHENNAI: Modelling?”, “Us?” and “Are you mad?” were some of the reactions that Swarnalatha J got when she asked several persons with disabilities (PwDs) all over India to be models for a calendar that her brainchild, the Swarga Foundation in Coimbatore, had planned to bring out. But there were two people from Chennai who were eager to be a part of the venture — Shanmathy Kumar and J D Madan, two PwDs, who are among the 12 featured in the calendar. 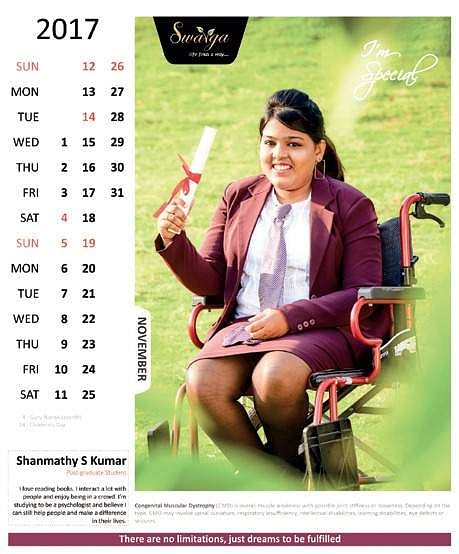 Shanmathy, a student of psychology at Madras School of Social Work (MSSW), suffers from Congenital Muscular Dystrophy. “My mother learnt about the calendar through a magazine and contacted the Swarga Foundation. Swarna later reached out to me through Facebook,” says Shanmathy.
Madan, who is a social worker and former racer, is a quadriplegic, but that did not stop him from driving his Volkswagen Jetta that had been re-modelled for him. Swarnalatha was determined to have Madan as a part of the shoot. “She had seen my pictures at an event and contacted me regarding this shoot and I was like ‘Why not?’,” says Madan.
Though they are not professional models, both Madan and Shanmathy had the time of their life shooting for the calendar. “I felt like a star during the shoot. I was in a blazer and people came up and asked if a Hollywood film shoot was going on,” she laughs. “It was not that difficult as I am used to taking pictures on my phone with friends. The only difference was that it was a location-photoshoot and I was posing for a professional photographer.”
Madan pipes in, saying, “My shoot was in a swimming pool and it was a breeze; it was quite effortless. I could just be myself.”

The photographers — Khushboo Agarwal and Sukil Tarnas — met the models to understand their restrictions. “We did not want to tire them by asking them to pose a lot,” explains Khushboo. “We wanted them to be comfortable in their natural element. We worked out a theme based on what they are in real life and what interested them.”

For example, Shanmathy’s photos were taken in a park with natural sunlight, where she held a degree in hand. For Madan, they took shots of him in a swimming pool, and also when he was driving, as that was one of his passions. “As creative people, we have always wanted to branch out. A photoshoot with PwDs is a challenge. But now,  we want to engage in more photo and video shoots involving PwDs,” she smiles.
“This initiative helps create awareness and that is what we need right now. I hope this will bring about a change…at least about the kind of problems we face,” avers Shanmathy.

“The perception regarding a wheel chair is that we are restricted, but through this shoot we prove that wheelchair users can also do other things,” points out Madan.
Having conceptualised this idea in February, Swarnalatha began putting together the whole thing on her own. “I did have Suraj, one of the models from Coimbatore, help me out,” she pitches in. “The main aim was to show those things that are beyond a person’s disability. When a person wakes up in the morning and looks at these photos on a calendar, he/she will feel positive. ‘If they can do it, why can’t I?’ – that should be the attitude,” she says.
Swarnalatha is aiming higher for the next calendar shoot. “I’ll probably go international. That’s my ultimate aim,” she grins.The calendars are available as desktop and wall hangings and are priced at `300 each. For details call, 8870955111 or write to swargafoundation1@gmail.com