Drink your Mazaa in peace...there are no deadly viruses in it!

A common hoax message is about soft drinks being injected with HIV and Ebola viruses. But, experts say they cannot spread through food

CHENNAI: There’s no dearth of hoax messages on social media but those that cause panic among its users are about poisonous substances being mixed with our daily food products. Parents usually fall for these messages. They not only warn their children about it but also share it generously with everyone…without verifying the message. While it might be advisable to avoid junk food, it should also be made clear that not all of these messages are factually correct. 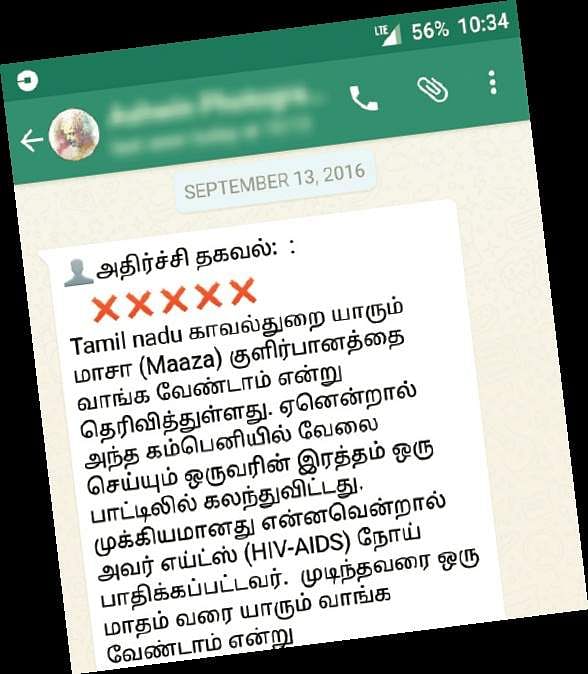 For several years, a hoax message that keeps popping up every now and then, is a warning to the public asking them not to consume the mango soft drink ‘Mazaa’ because a factory worker, who was allegedly affected with HIV had mixed his blood with the drink while it was being made. The message, written in Tamil, states that the HIV virus would now spread to all those who drank the affected drink and the forwarded message also claimed to be sourced from the news channel NDTV, to show its authenticity.

While food contamination is possible during manufacturing and processing, experts say that it is impossible for a deadly virus such as HIV to sustain or survive in inanimate items and cannot be spread by consuming food. Therefore, the message is baseless and not truthful. Another message states that the Ebola virus is being injected into the drink, which is again untrue as it’s impossible for Ebola to spread by just consuming food products.
According a statement by the Centre for Disease Control (CDC) the HIV does not live long outside the body, even if small amounts of HIV-infected blood or semen was consumed, exposure to air, heat from cooking and stomach acid could destroy the virus. Therefore, whether it’s HIV or Ebola — both cannot survive in Maaza bottles. Let’s be a bit careful about sharing such messages…if you cannot verify its authenticity, best thing to do is just ignore it!