Say it’s not because of charnockite rock surface, cite Inadequate space for covers as reason

CHENNAI: Negligence and lack of adherence to global standards may be the reason for road cave-ins during construction of underground Metro Rail tunnels, geoscientists and tunnelling experts say.

Dismissing theories that such cave-ins were natural due to Chennai’s charnockite rock surface - which are characterised by high compressive strength - geologist L Elango from Association of Geoscientists for  International Development said nothing but negligence explains such frequent rapid subsidence.

Experts suggest that frequent cave-ins indicate enough space was not provided for ‘covers’ - a zone surrounding the tunnel, which needs to be twice as high and thrice as wide as the tunnel’s diameter according to global standards. 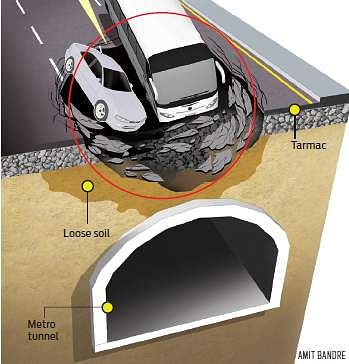 Damp areas can be spotted early before shaping the tunnel when up to 3 feet has been dug, said Anil Kumar, a geologist.

“Authorities should look out for such damp areas every now and then to avoid such mishaps and immediately fix it by injecting cement slurry through the pores at high pressure,” he told Express.

Sunday’s cave-in, the second such incident in the city in the last 2 weeks, involved foam overflowing from the site as in many such occurrences in the past.

“This indicates there was seepage of water from the surface through pores below and surface valves in the tunnel should have become damp,” Seema Devi Chettri, a tunnelling geologist from Anna University, said.

“In space-strapped stretches, additional forms of support such as ‘rock bolts’ or ‘short grids’ should be given,” Chettri said.

Cave-ins are common in cities across the world where metro rail constructions are taken up. To ensure safety, traffic along such stretches are blocked until construction is completed and opened again only after stability is ensured.

However, Chennai Metro Rail said on Sunday that the road will be reopened for traffic on Monday after the damage is fixed

Stay up to date on all the latest Chennai news with The New Indian Express App. Download now
TAGS
GeoscientistsAnna Salaicave