92 years of a young rebel

Mrs YGP spearheaded the revolution of changing the Anglicised method of teaching in Tamil Nadu .The veteran educationist remembers her face-off with the Mahatma, and a chat with Indira Gandhi.

CHENNAI: On a musical margazhi evening at Bharat Kalachar, we met the 92-year-old renowned educationist Rajalakshmi Parthasarathy, fondly known as Mrs YGP. The now ‘grand old matriarch’ is still young at heart and her thoughts and extraordinary memory mirror this.

A new revolution in education was spearheaded by Mrs YGP, when in 1958, she laid the foundation for a school, along with friends from her ladies club, which would later go on to become one of the finest institutions in the country — Padma Seshadri Bala Bhavan (PSBB). “My husband (YG Parthasarathy) didn’t ask me to work for him or ‘serve’ him. 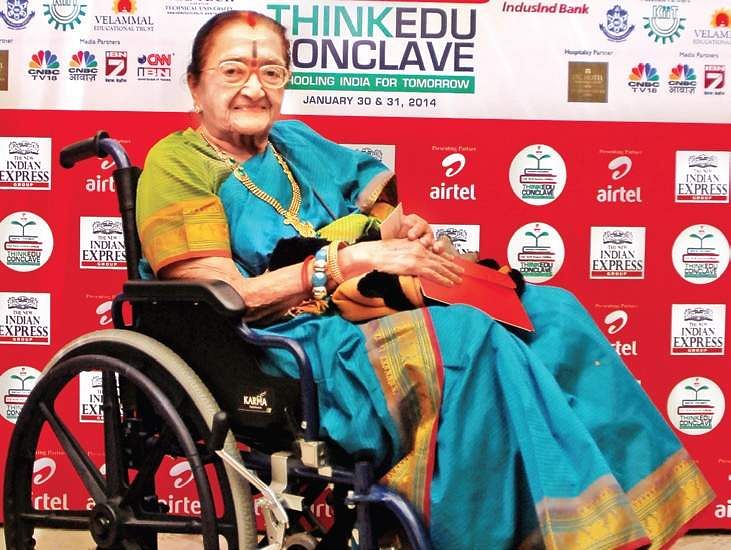 He encouraged me to start a school instead. We weren’t happy about how most schools were imitating the Anglo-Indian system, without even questioning or tweaking it according to the Indian system. So, we wanted to establish one that would guide children about our culture and tradition, without compromising on the contemporary aspects,” she recalls.

The school began as a thatched shed on the terrace of her residence, with 13 students. “We taught Sanskrit shlokas, music, dance and also to reflect the Indian tradition, our students say, Shri Gurubyo Namaha to greet, instead of ‘Good morning’ and Baa, Baa, Black Sheep also used to echo in our school!” she shares.
Though ridiculed initially for the unconventional system, gradual acceptance from parents and a strong word-of-mouth brought the school recognition.

“People were yearning for a platform that would give them the ‘Indian touch’ they needed. They first said it would become more of a cultural centre than school. The parents were so used to the Anglicised method of teaching and it took a while to grab their attention. But, once it did, we emerged successful,” she shares and recalls how the school was compelled to adopt the shift system in the 70s and 80s. “There was high demand and we had to adopt the shift system. But, that was a sign of success. From a humble beginning to getting recognition,” she smiles.

Often referred to as ‘Rajamma’ by friends, Mrs YGP has been the most truthful version of the word ‘rebel’. Case in point is an incident that took place when she came face-to-face with Mahatma Gandhi. A young Rajalakshmi, when introduced to him, was asked if she knew Hindi. As a fitting reply, she asked ‘Do you know Tamil? Similarly, she recalls an incident: “Rules back then didn’t allow me to be a principal of my boy’s school. So, when I had attended the All India Women’s conference, where Indira Gandhi was also present, I took it up with her. She laughed and said she would look into it. And the change came about!” she beams.

But she credits her husband for playing a huge role in the creation of the school and Barat Kalachar, the cultural wing, which was also his idea. “It’s not an easy to open and run a school successfully. But I managed to do it with his help,” smiles the art connoisseur.

The school was her crusade for the Indianisation of children, but in a holistic way. Ask her if she has triumphed, she ponders and says: “Knowledge about everything is important. But, I see a lack of knowledge about our heritage among youngsters. They are moving towards westernisation They should be exposed to our roots and that will create a ripple effect,” she adds, as the curtains go up for the next performance.

In a nutshell...
●    A 17-minute film titled As you like her directed by SP Muthuraman, was released on her 80th birthday
●    On January 26, 2010, she was awarded the Padma Shri
●    She penned an autobiographical memoire in 2004: Excellence Beyond the Classroom: A Memoir of YGP