GPS and GPRS are not the same things!

A message going viral on social media platforms claims to be the bearer of good tidings.

CHENNAI: A  message going viral on social media platforms claims to be the bearer of good tidings. It says that the women of Tamil Nadu can now SMS the number of the taxi or auto that they board and leave it to the Chennai City Police to track the automobile through ‘GPRS’.

“Before boarding a taxi or auto, SMS the vehicle number to this number: 9969777888. You will get an acknowledgement via SMS and the vehicle will be tracked by GPRS,” the message reads. 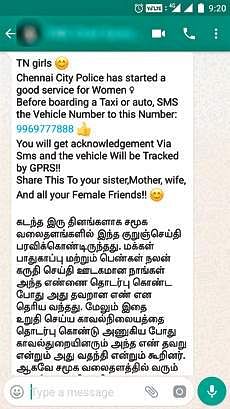 There are several things wrong with this message. Firstly, if a woman texts the above number, she is not likely to receive an acknowledgment because the number simply does not exist. Secondly, a silicon valley prodigy you may be – but tracking an automobile through ‘GPRS’ as the message claims, may not be feasible. GPRS stands for General Packet Radio Service and is a transmission technology.

The sender may have mistaken it for the GPS or the Global Positioning System that could give you a location in terms of latitude and longitude. The GPRS, however, may be used in conjunction with the GPS.

Not only does the number not exist, the city police has denied the existence of any such facility. However, it has repeatedly asked cab aggregators to install a ‘Panic button’ in the rear seat, and to explain its utilities to every passenger travelling by the cab. It had also asked cab aggregators to install GPS that should be checked periodically to ensure its functioning.