The importance of road safety in the fast-paced life we lead today cannot be stressed enough, though many do not follow simple rules like wearing a helmet.

CHENNAI: The importance of road safety in the fast-paced life we lead today cannot be stressed enough, though many do not follow simple rules like wearing a helmet. Aiming to create awareness about helping accident victims, Thozhan, an NGO, is actively working across the city for the past 10 years, under their initiative, ‘Accident Free Nation’. We met a few of these good Samaritans at their event on Sunday, held at the Thangal park, Ambattur.

Addressing the gathering, M Radhakrishnan, founder of Thozhan, explains about the Good Samaritan Narration. “It may be implemented as a separate act under the Motor Vehicles Act, 2016 amendment, which is under discussion in the parliament,” he says. “It highlights that as a good Samaritan who is helping an accident victim, you should not be harassed by the police, need not fear court cases, need not pay at the hospital, or hand your ID card in any way.” he explains. 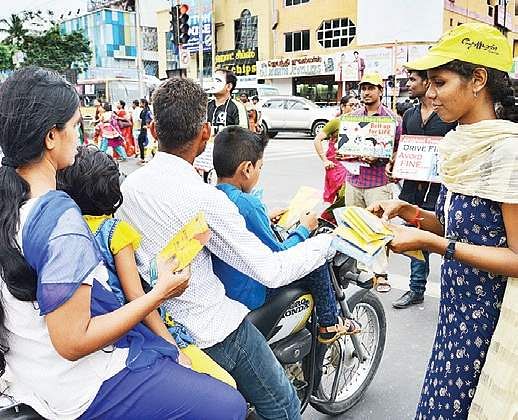 Most people avoid helping accident victims fearing legal repercussions, for which Radhakrishnan says that Good Samaritan act will protect them from such issues. “I would suggest that another person takes a video of you helping. If hospitals refuse to provide assistance, get it in writing from them,” he advises.

Through ‘Accident Free Nation’, over 3,000 volunteers of Thozhan take to signals, parks and other places in the city, with sign-boards and other paraphernalia. They don’t just stop at preaching rules but take other measures to draw attention from the public. “Last year, we devised the concept of dressing up 100 volunteers as Lord Yama, and delegated them to 100 signals across the city,” explains Radhakrishnan. Imagine the god of death warning you to wear your helmet or else!

Likewise, they have also dressed up as jokers, worn masks, and made traffic safety awareness classes fun. One of their volunteers, Veeramani Sekar, a 36-year-old bank manager with hearing disability, suggested using mime as a way to reach more people. Veeramani often steps in front of the vehicles during a red signal, and mimes the importance of wearing helmets, seat-belts and what would happen otherwise. Children and adults are intrigued and nod back at his actions, agreeing to follow rules.

Thozhan has diversified itself in its pursuit for an accident-free nation. It has conducted cycle rallies from Kanyakumari to Chennai, to highlight ‘Don’t drink and drive’. They have also designed and submitted to the commissioner office, a proposal for a fully modernised signal, which can record the traffic at any signal and present it in a mobile app, visible from anywhere in the world. “If it gets approved, the world’s first modernised signal will be in Chennai,” he explains.

“You have to be an example, to make a difference. At a traffic signal, when the light changes red, if the person stops, the people behind him also stops. But if he goes on, the rest follow him,” explains Sathish Kumar, of Thozhan. After answering the safety queries of the public, Radhakrishnan wraps up the event saying, “Road safety is a lifestyle. It need not be propagated by the government or by organisations, its everyone’s responsibility.”

Golden hour rules
Golden hour is the time after a traumatic injury, when emergency treatment is likely to be successful.
Ensure ‘Scene safety’. Be aware of passing vehicles, shattered glass pieces, rogue EB cables etc before approaching the person.
Try to revive them by tapping firmly on the shoulders
If no response, check the carotid pulse just below the neck
Check airways. Place the tip of your ear near the nostrils, and notice whether their abdomen is rising and falling, which signifies breathing
If they are breathing, tilt the head towards you, bend the leg with knee up, and tilt the body to lie on their uninjured side. This is the recovery position.
Hold bleeding parts above, to reduce bleeding.
Do not move the person if you suspect any bone injuries, especially spinal cord. It may aggravate the injury.

Now we are on Telegram too. Follow us for updates
TAGS
road safety accident helmet