Kira’s folktales in a play

Perch, a city-based theatre group, is reviving its seven-year-old play Kira Kozhumbu. It is inspired by author Ki Rajanarayanan’s  stories, and promises to be a family entertainer.

CHENNAI: Once upon a time, a long time ago, the sky was almost within touching distance of Earth. Why do you think that was?” asks Rajiv Krishnan. The artistic director of Perch, a 10-year-old theatre group from Chennai, Rajiv doesn’t stop with the seemingly abstract yet intriguing questions. “Why does the chicken keep looking around; what do you think it’s searching for?” he continues.

Inspired by Ki Rajanarayanan’s collection of folktales, Nattuppura Kadhai Kalanjiyam (A Collection of Country Tales), Perch is reviving its seven-year old play, Kira Kozhambu on its’ 10th birthday, and KiRa’s 95th birthday. “It’s a pun on the name, and kozhambu came about because we mixed all the tales and added our own spices to make a new recipe!” laughs Rajiv. 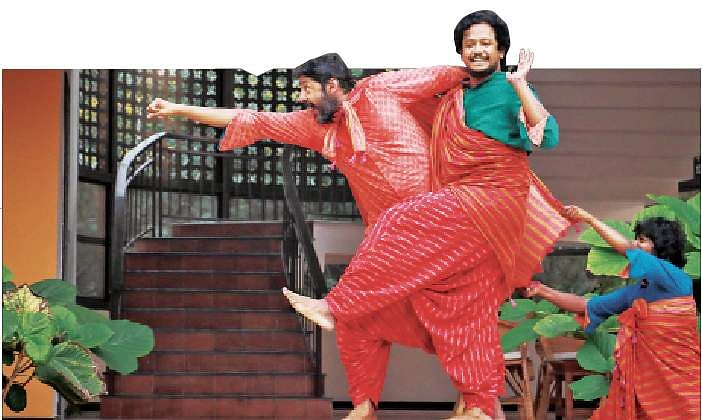 A strong-performance more than a play, Kira Kozhambu was conceived seven years ago, when Rajiv read the English translation of KiRa’s 944-page Tamil book. “It seemed interesting to make a play out of folktales. We were trying to string them together but we kept running into a block,” explains Rajiv.
They then went to visit KiRa himself, who resided in Pondicherry for guidance. “He is really amazing — he can turn anything into a story. We were sitting with him for hours, and just listening to him, entranced!” he says. “When we told him the problem, KiRa had just one thing to say — ‘You can do whatever you want — once you take the stories, it becomes your story’.”

The team came back, energised and inspired, and strung bits and pieces of various tales, weaving Kira Kozhambu. It was played across venues in Chennai and Pondicherry, the most memorable one, Rajiv recalls, is when they had performed in front of KiRa himself. “He and his wife came for the show. He didn’t say much after the show; he’s not one to praise. His wife loved it a lot,” he recalls.

Speaking of the revival of the play after a seven-year hiatus, Rajiv says it came as a surprise call. “Somebody called us that they’re organising a commemorative function for KiRa’s 95th birthday, and would love for us to come perform the play again, saying KiRa also remembered it from earlier,” Rajiv says.

They brought back one actor from the old play, Anand Sami, and roped in two new performers, Kalieswari Srinivasan and Ravindra Vijay. Perch performed Kira Kozhambu version 2.0 at the convention to celebrate KiRa’s birthday in Pondicherry. “KiRa called us back to his home a few days later. He told us how much he enjoyed the play,” Rajiv recalls.

Playing three shows this weekend in Chennai, Kira Kozhambu has three actors playing several characters, taking the audience on what’s promised to be a kaleidoscope of a journey involving a self-important eagle, a confused chicken and a lucky snake amongst others. Comedy, satire, music, and dance — it assures to be enjoyable by both children and adults.

The play will be performed on November 4 & 5 at 7 pm, at Spaces, Besant Nagar. And also on November 5 at 11 am, as part of ‘Theatre Binge’, Alliance Francaise of Madras.
For details, visit their FB page: Perch