The street was christened as Bharatiyapuram, after the Tamil poet and freedom fighter Bharatiyar, by the then-MLA K Vinayagam in 1963. The first statue, that of Mahatma Gandhi, was set up in 1973.

CHENNAI: The small lane that constitutes Bharatiyapuram is a mismatch of small concrete huts with thatched roofs and large, well-kept apartment buildings. A small shrine for the recently deceased DMK leader M Karunanidhi stands on the road, and three young girls fold their hands in respect. A tattered poster of late AIADMK leader J Jayalalithaa is stuck on one of the walls, a BJP flag flutters at one end of the street, and a shrine, painted with the tricolour and encasing large statues of Mahatma Gandhi, K Kamaraj and Bharathiyar, welcomes visitors into the small slum community.

The street was christened as Bharatiyapuram, after the Tamil poet and freedom fighter Bharatiyar, by the then-MLA K Vinayagam in 1963. The first statue, that of Mahatma Gandhi, was set up in 1973. Two years prior to that, in 1971, the Congress leader K Kamaraj visited the slum. 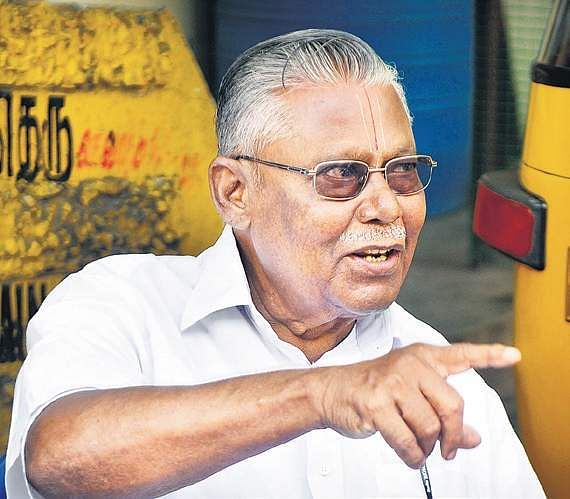 “Kamaraj took the initiative to visit us. This area had a primarily Congress-leaning vote bank. Kamaraj spoke to everyone kindly. He would ask everyone if they had eaten, and if they were well. He asked us what our problems were, and listened to everything patiently,” said A Achuthaiah, a resident and private relations advisor at Rajashree Sugars and Chemicals Limited in Theni. The shrine was maintained by the locals, who would donate a little money for its maintenance. Achuthaiah, K Mohanakrishna and V Ethiraj, all local residents, were deeply involved in politics at the time, paid the lion’s share.

Shortly after the Tamil Nadu, Slum Clearance Board (TNSCB) was established in September 1970 while Tamil Nadu was under the rule of Karunanidhi, the slum saw a shift and became a more DMK-leaning vote bank as the board offered them many concessions. Achuthaiah recalls that the area slowly began to transform and develop. Roads were built, apartments were constructed, a proper drainage system was installed, and people began to live proudly in the area.

In 1974, Kalaignar visited the locality to speak to its residents. “My house is the ninth one from where the street begins. He came to see me after he visited the temple nearby. He stayed at my house for some time, and made sure that everything was alright. He visited this area three times,” said the 82-year-old, who remembers the late politician as a kind, polite and concerned leader.

However, merely three years later, Karunanidhi’s political rival M G Ramachandran, leader of the ADMK, walked through the streets of Bharatiyapuram. The Cooum River, which circles the neighbourhood, would frequently flood as the riverbed was flat. The film star visited the area in 1977 and promised to help the people. In 1979, bunds were constructed along the river.

“MGR told us that if we wanted electricity, we had to pay the corresponding tax, which was about `5 then. He used to be an employee of the TN Electricity Board, you know, so he knew exactly what to do. We listened to him and most of the houses were electrified. For those who couldn’t afford it, we would just let them tap into our wires,” said Achuthaiah, smiling knowingly at an elderly resident.

In 1984, while MGR was still in power, the Sulochana Sampath-led TNSCB notified Bharatiyapuram, at a time when the board was attempting to issue allotment orders to streamline the notification process. This further boosted people’s morale, for they could now live their lives simply and at peace, without fear of sudden removal.

“Every leader who came here paid their respects at the shrine. They garlanded the statues before stepping foot inside the area. It is a matter of pride for us. Every Independence Day and Republic Day, Gandhi Jayanthi and on Kamaraj’s birthday, we hold functions. We give books and pens to children, we give saris to women, and distribute sweets in the entire locality,” said Achuthaiah.

The shrine, which is flanked by two fluttering tricolour flags, has a washing of orange, white and green paint on the outside and inside, where the three statues stand tall and proud. The visages of Gandhi, Bharatiyar and Kamaraj gaze over the street and its residents, unblinking.

Now we are on Telegram too. Follow us for updates
TAGS
Tamil Nadu Slum Clearance Board Bharatiyapuram