Chennai already has the dubious distinction of having the lowest green cover among all the metropolitan cities in the country and the gap seems to be only widening.

CHENNAI: Chennai already has the dubious distinction of having the lowest green cover among all the metropolitan cities in the country and the gap seems to be only widening. In the 426 sq km Greater Chennai Corporation (GCC) area, only 64.06 sq km (15 per cent) accounts for green cover as against the target of 33 per cent stipulated in National Forest Policy.

This was revealed in the latest scientific study conducted by Care Earth Trust, which is a technical non-governmental organisation concerned over the conservation of biodiversity. The study was funded by the Tamil Nadu Urban Infrastructure Financial Services Ltd and is the first detailed zone-wise mapping of green cover conducted after cyclonic storm Vardah wreaked havoc, uprooting close to 1.5 lakh trees. The researchers have used the finest 1.5 metre satellite resolution coupled with painstaking ground verification that includes measuring 9,000 trees, surveying 200 kms of road, 525 parks, medians, avenues, MRTS stations and institutions.

The 600-page study report has been submitted to Greater Chennai Corporation and a stakeholders meeting, moderated by the Regional Deputy Commissioner (North) S Divyadharshini, was conducted at Amma Maligai on Friday. Resident associations of all 15 zones of GCC attended and gave their suggestions, which were recorded and will be incorporated into the final report by retired PCCF S Balaji, who headed the project.

According to the report, Adyar has the highest green cover with 30 per cent followed by Teynampet - 22 per cent and Anna Nagar - 20.85 per cent The zones that are poor in environment performance are Tondiarpet and Perungudi with 8.37 per cent and 5.31 per cent. Again, Adyar zone tops in terms of number of parks. Adyar has 51 parks followed by Perungudi and Alandur, which have 48 parks.

However, Perungudi and Alandur parks lack tree cover, which makes them potential areas for planting trees. According to sources, the corporation is yet to develop 40 parks, though land has been allotted.
Balaji told Express that the objective of the study was to assess the existing urban green spaces comprising all open areas in the city and to prepare site-specific strategies and structural plan for increasing green cover by creating multifunctional landscapes and appropriate vegetation to enhance urban resilience and human well-being.

“We have proposed a five-year greening strategy through which 10 lakh trees can be planted and nurtured. This will enhance the green cover by 34.58 sq.km. This means the city will have 40 per cent green cover. This will be possible if it is community driven with the support of NGOs and government departments. The idea is to plant 2 lakh trees each year,” he said. 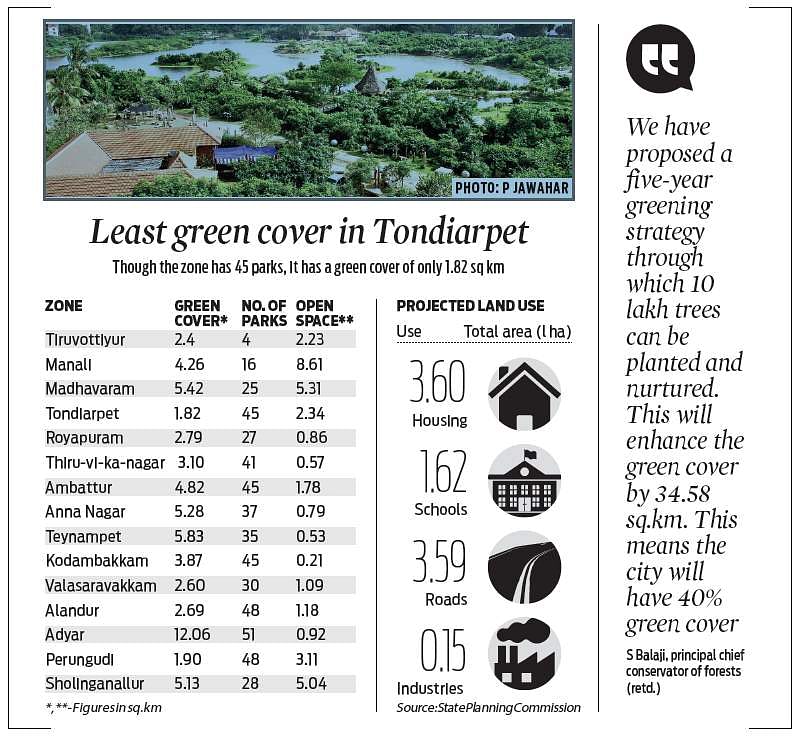 He said Chennai was lagging way behind in terms of per capita green cover compared to other major cities in the country. In 2005, we had 79 sq.km of green cover, which shrunk to 69 sq.km in 2012 and further down to 64 in 2017. We need a keep environmental balance for the city to be climate resilient.
“The corporation and forest department are sincere in their efforts to enhance the green cover of the city and supported us in bringing out such an exhaustive report,” Balaji said.

The Vardah cyclone has taught important lessons on what kind of trees Chennai should have. Being prone to tropical cyclones, it is important to have native species rather than exotic ones. The current study revealed that though there are 121 species, six tree species are dominant - Iyalvaagai, Perugondrai (Copper-pod), Pungai (Indian Beech), Vaembu (Margo, Neem), Mayil Kondrai (Royal Poinciana, Gulmohur), Thoongu moonji (Rain Tree),  and Naattu Badaam (Sea Almond, Tropical Almond). Of these six species, three are exotic.

Keeping this in consideration, the scientists have recommended 91 different tree species to be planted over a period of five years, which includes 30 tree species that attract birds. Criteria for selecting species are durability, indigenousness, non-invasive, easy availability ofsaplings, enhanced biodiversity and ecosystem services.

Srinivasan, executive engineer (parks), GCC, told Express that there is more potential in newly added areas like Tiruvottiyur, Madhavaram and Sholinganallur. “This is a mid-report and the corporation will study the final report and take necessary steps in the interest of people of Chennai,” he said.

Shobha Menon, founder of Nizhal, an NGO that prepared the draft ‘Tree Act’ that recommended from setting up of a tree authority, and one of the invitees at the stakeholders meeting, said the government should be more proactive on the issue. “I have been into conservation for past 25 years and there hasn’t been a proper and scientific approach towards enhancing the green cover in Chennai,” she rued in the meeting.

Stay up to date on all the latest Chennai news with The New Indian Express App. Download now
TAGS
Chennai ecology Chennai environment