Hazard line not drawn, may open up low-lying areas for real estate.

CHENNAI: Tamil Nadu becomes one of the first few States in the country to prepare the draft Coastal Zone Management Plan (CZMP), a key document that streamlines the development along the coast and protect ecologically sensitive areas. The State Department of Environment (DoE) on Monday uploaded 115 toposheets of all 13 coastal districts in Tamil Nadu in its official website, seeking comments and objections from public within next 45 days. However, some critical informations needed for the active public participation are missing from these CZM maps.

Firstly, there is no hazard line, which forms the basis of CZMP taking into account sea-level rise, tides, waves and shoreline changes. In case this CZMP is approved without hazard line, it would potentially open up thousands of acres of low-lying wetlands for real estate. 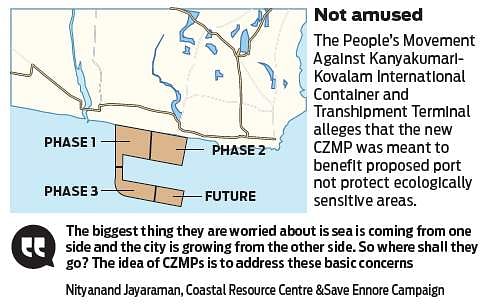 As per the annexure-1 of the CRZ Notification, 2011, which lists out the guidelines and preparation of the Coastal Zone Management Plans, hazard mapping should demarcate the land use plan of the area and the existing authorised developments on the seaward side. Besides, in case there is a variation in terms of change in CRZ classification in one particular area, say, from CRZ-1 (ecologically sensitive area) to CRZ-3 (undeveloped area) when compared to the CZMPs approved under the CRZ Notification, 1991, the Coastal Zone Management Authority (CZMA) concerned should explain the reasons. But, none of these were incorporated, which defeats the very purpose of calling for public consultation, alleged the environmentalists.

Nityanand Jayaraman of Coastal Resource Centre and Save Ennore Campaign, talking to Express, asked how fisher folk could give their opinions when there was no long-term housing plan put in place in the draft.

When contacted, AV Venkatachalam, Director, Department of Environment, told Express that the National Centre for Sustainable Coastal Management (NCSCM), which is coordinating the preparation of the CZMPs for all the coastal States in the country, has standardised the process. However, the hazard line is being prepared by the Survey of India, which has not yet completed it, not just for Tamil Nadu but also for the entire country. “Once the hazard line is prepared by the Survey of India, it will be incorporated.”

Similarly, the current draft CZM maps prepared for Tamil Nadu are macro toposheets of 1:25,000 scale. “The demarcation of structures and long-term housing plan can only be in the micro cadastral maps of  1:5,000 scale, which will be taken up in the second stage and final CZMP will be prepared and sent for approval from the Union Ministry of Envrionment, Forest and Climate Change (MoEF&CC). As per the CRZ notification, all information that has to be incorporated has been done and the CZM maps are very exhaustive and self-explanatory,” he said.

One of the biggest let-downs and the environmental compromise highlighted by the activists in the new CZMP was that large tracts of salt pans were hidden and coastal belt earlier classified under CRZ-1 was now classified as CRZ-3. MG Devasahayam, along with other members of the people’s movement, said they had rejected the new CZMP and would file objections. “There is a pattern in how Kamarajar Port has come in Ennore and the proposed VOC Port in Kannyakumari-Kovalam. Our visit to Ennore and interactions with local communities about the benefits and pitfalls of Sargamala-style industrialisation leave us convinced that the Kanyakumari port proposal will not be good for our region.”