The doctor who runs marathons

Dr Jayanthy Ravindran, MD,  Tamira Medical Spa, is a fitness enthusiast who also has a passion for interior designing.

CHENNAI: Raised by her single mother, Dr Jayanthy Ravindran comes from a conservative family of businessmen. It was rare for girls to pursue higher studies, but Jayanthy managed to do so with her mother’s support. After all, it was it was her mother’s dream to see her become a doctor.

When Jayanthy began, she wanted to become a physician, but it wasn’t long before she realised that her passion was in surgery. She, soon, changed her focus and became a cosmetic surgeon. Fifteen years later, today, Jayanthy is the MD of Tamira Medical Spa. “My idea was to make people smile by boosting their self-esteem and confidence,” she says.

She tells us what leisure means to her, and also discusses her dreams, future plans and more. Excerpts follow: 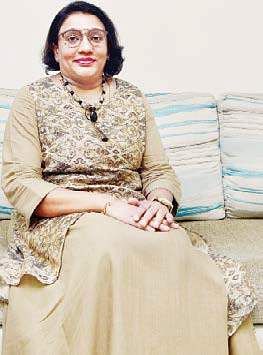 If not into medicine, what do you see yourself doing?
I would have definitely been in business, following my father’s footsteps. But I feel like I’m on the right track, pursuing aesthetics. I think doing aesthetics, with a standard, to make it function like a corporate, is what I am achieving now.

Can you tell us a bit about your childhood?
I studied in a city-based residential school. I don’t know if I should call myself a studious kid or not, because I was good in academics while at the same time, having a huge passion for sports. Till class eight, I was not very serious about studies, but in classes 11 and 12, I became serious. I am a focused person. If I want to achieve something I work towards it, and that is my nature. Since I come from a conservative family, when somebody asks me not to do something, that’s when I’m motivated to do it.

What kind of sports were you into? Do you still play?
I was an athlete back in school and did a lot of short distance running and also  long jumping. I continued to do this until I was in college. Then I quit, although I did play table tennis for a while in between. But I was really into my studies, and wanted to focus on my career. It was only recently that I started running again. I have been doing marathons as well. In the last three months, I have been trying to stay fit. But the best thing to do is run; so I run with a city-based group.

You mentioned that you love music as well. What genre of music do you listen to?
Whenever I am stressed, I like to be alone and listen to music. I like familiar songs, and prefer Tamil — especially Illaiyaraja, and instrumental music that helps calm my mind. I think I can sit in a room alone for an entire day and listen to music. I feel it’s a big stressbuster for me.

Do you have any other passions?
I love interior designing. Every time I travel, I click photographs of different hospitals from around the world, because I want to implement those ideas in the clinic here. Our centre will have both the look of a hospital and a spa. The colours we have used are very subtle and neutral. I have lot of interest in it, and everywhere I go, I pick up things for interior designing.

You have travelled extensively. Tell us a bit about it?
I was born in Sri Lanka and then came to India. I have travelled to Singapore, Malaysia, Europe, Netherlands, France, Prague, and so on. Although most of my trips are work related, I make it a point to take some time off and explore each place that I visit. When I was in Prague, we did a bit of trekking. I love nature and try to stay as close to it as possible.