The squares of success

Not everyone can solve the Rubik’s cube, but those who can, do so within a few seconds.

CHENNAI: Not everyone can solve the Rubik’s cube, but those who can, do so within a few seconds. At the recently held qualifiers of The Redbull Rubik’s Cube World Championship 2018 at Mumbai, three Chennaiites  — Vijay Kishore (Mixed Speedcubing), Priyadarshini (Female Speedcubing), and Sripad Sarma (Fastest Hand) — made it to the finals of the competition to be held in September in Boston. 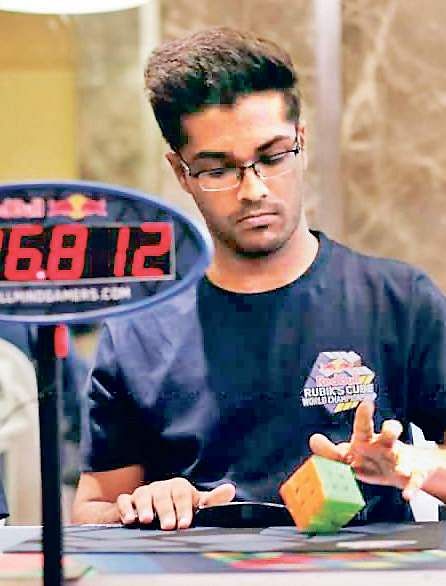 “I learned to cube from my father in 2013. I took part in my first competition in 2014 and I failed miserably,” says Sripad. His friend, Vijay Kishore, started cubing as he felt he was the odd man out among his cubing friends. “During my class 10 pre-vacation tuitions in 2012, I asked one of my friends to teach me the basics of solving the cube. Then, I downloaded a PDF with the algorithms describing the cube’s orientation to solve it completely,” he says. The other qualifier, 16-year-old Priyadharshini, was inspired by Will Smith (who solved the cube in the movie The Pursuit of Happyness) to try out cubing.

They agree that there are various algorithms to solve the cube. “There are about 40 quintillion mathematical combinations to solve the cube as it has eight edges and 12 corners. If you put it across in the terms of algorithms, then there are about 58 orientation of the last layer and 28 permutation of the last layer. I prefer using CFOP method — white cross, first two layers, orientation last layer, permute last layers,” says Vijay. CFOP is popularly called Fridrich Rubik’s Cube Method. Sripad follows Roux method. Unlike the CFOP method, the inventor of this method used it to achieve an official sub-15 stage. “There is no particular method to solve a cube. Different layers need a different method to match the colours of the square,” says Priyadharshini.

Regular practice increases a speed of the cuber. “Though I have a short attention span, I love solving the cube. When I was in school, cubing was a daily routine. But now due to lack of time, I don’t practice it regularly,” says Sripad adding that one can master the cube if they follow the algorithm accurately.

The Redbull Rubik’s Cube World Championship 2018 has provided them with an opportunity to meet other cubers and ace their game. “I made many friends and also learned a lot from them. In competitions we sit side-by-side and critique each other’s mistakes,” says Sripad. But for Vijay, it was a different ball game as he has also participated in the WCA games. “The format of the competition was different from WCA. My friend who was also my opponent gave me a run for the money. I am happy to have won the qualifiers,” he says.  On the other hand, Priyadharshini had a dramatic ending during the final leg of the qualifiers. “My opponent Riddhi Shukla and I were tied towards the end. We played till the last face-off which I won by a narrow margin,” she says.

All of them are now gearing up for the finale at Boston, and their parents are happy. “My dad always boosts my morale. He says that participation is more important than winning,” says Sripad. Vijay’s parents always encouraged him to continue with his hobby. “Unlike other parents, who would not let their kid take part in a competition when there’s an exam the next day, I was never restricted from participating in any event,” he says. However, the young girl’s parents were reluctant initially, but they become her biggest support system during the tournament. “They were fine with me cubing as long as I was doing well academically too,” says Priyadharshini.