CHENNAI: After a four-year delay, public hearing on the ambitious Chennai Peripheral Road (CPR) project will be held on July 12 as the project awaits the Coastal Regulation Zone and environmental clearance.

The 133-km proposed road will skirt Chennai and its heavy traffic to connect Mahabalipuram in Kancheepuram and the Ennore Port in neighbouring Tiruvallur. It is primarily aimed at decongesting the northern parts of the Chennai Industrial Corridor.

An update on the TNPCB website on Monday says that the hearing has been organised at SV Rajammal Tirumana Mandapam in Tamaraipakkam in Tiruvallur.  The project road was approved by the steering committee and finalised by the State Department of Highways and Minor Ports on July 9, 2014.

Though the Environmental Impact Assessment report indicates that there is no major environmental concern in construction of the project road, the starting stretch of Section 1 (Northern Port Access Road from Ennore Port to Thatchur on NH-5) requires CRZ clearance.

The Section 3 (Tiruvallur Bypass to Sriperumbudur on NG-4) and Section 5 (Singaperumalkoil on NH-45 to Mahabalipuram) of the project road is passing through forest area for a total of around 2 km and hence the project requires forest land of around 10.23 hectares. The project is expected to lead to cutting of about 4,797 trees out of which 806 trees will be felled and remaining 3,991 trees with girth size below 900mm will be transplanted. This mandates environmental clearance.

A senior official in the Tamil Nadu Road Infrastructure Development Corporation (TNRIDC), a highways wings of the State government, which is entrusted the responsibility of implementing the first section of the CPR, told Express a detailed project report has already been approved and the public hearing is being conducted to obtain CRZ and environmental clearance. “Land acquisition is underway for the first Section,” he said. The project is being funded by the Japan International Cooperation Agency.

The official said the proposed road would complement the outer ring road that connects Vandalur and Tiruvallur-Ponneri-Panchetti Road in Minjur.

This road will connect all major radial roads including four NH roads and Ennore and Kattupalli Ports which accelerate industrial and economic growth of the State. As a whole, the formation of peripheral road will save travel time/distance of bypass-able traffic and improve port connectivity. It will also help container movement from the southern districts along ECR, 765 km of which the state is widening and upgrading between Chennai and Kanniyakumari. 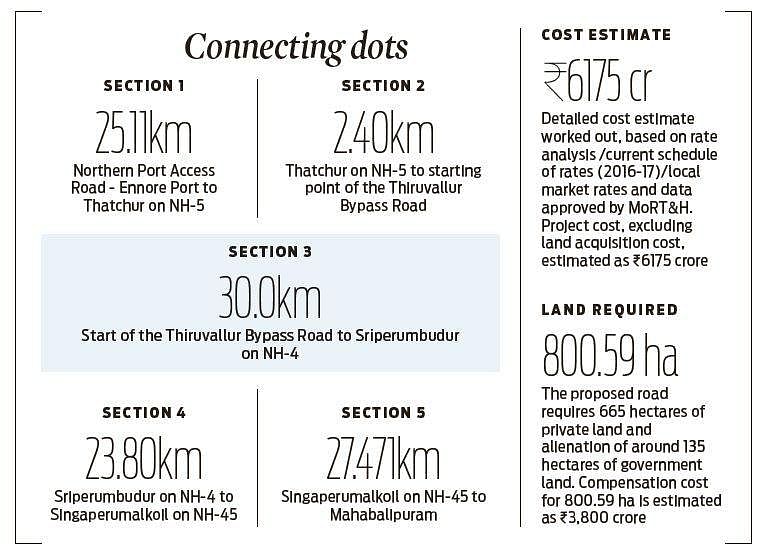 More from Chennai.
Now we are on Telegram too. Follow us for updates
TAGS
Chennai Peripheral Road road Mahabalipuram