Swimming against the tides

On a weekday evening, we dropped in to meet swimmer-sports athlete Sriram Srinivas Rajasekaran at his family-run departmental store in Vadapalani.

CHENNAI : On a weekday evening, we dropped in to meet swimmer-sports athlete Sriram Srinivas Rajasekaran at his family-run departmental store in Vadapalani. ‘Mother will join you in a while’ said Sriram’s brother Balaji, directing us inside the office.  Once we found a quiet spot to sit, we saw a heartwarming scene on the security monitor — a group of 20-year-olds along with 25-year-old Sriram gleefully chatting and laughing. “It’s time for his computer and dance classes. The other children are part of our Sai Sriram Trust for Children with Disabilities. I monitor them from my office,” says Vanitha Rajasekaran as she enters the room.

Sriram has multiple disabilities — 90 per cent cerebral palsy and 83 per cent intellectual disabilities. But earlier this year, he swam five kilometres across the sea during the ‘Samudra Pheri - Ocean Sailing Expedition 2018’ conducted by the NCC Directorate of Tamil Nadu, Puducherry, Andaman and Nicobar and won the achiever award.

In October, a five-minute short film ‘Never Give Up’ tracing the life of Sriram was released by his family, and his mother talks to us about Sriram swimming against the tide. “When he was born, he was a normal baby. But, by the time he was six months old, we noticed that he didn’t have head control. We were referred by a doctor to take him to Madhuram Narayanan Centre for Exceptional Children. I came out of the hospital crying...my heart sunk and I couldn’t accept that he was a special child. The awareness about disabilities was poor 25 years ago,” she says. 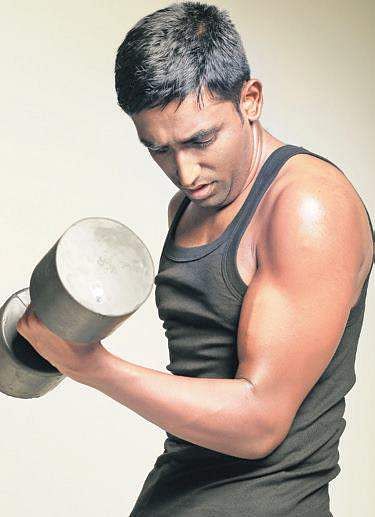 Vanitha took him to an Ayurveda doctor who promised that medicines will cure him. “Until Sriram turned six, we tried everything — Ayurveda, Varma, acupressure, medicines...we were waiting for a miracle to happen. He hadn’t even called me ‘Amma’ till then,” she says.

The family revisited Madhuram Narayanan Centre, and Sriram was diagnosed with cerebral palsy. “It has been quite a hard journey — of physical warfare, disappointment, frustration, anger. The emotional battle was intense, but as a family and with Sriram’s never-give-up attitude, we have been able to overcome challenges,” she shares.

When Sriram was eight, he was introduced to swimming as part of hydrotherapy to strengthen his legs and to keep him occupied. “By then, he realised he couldn’t run or play like the other kids. So, there was a lot of underlying frustration and anger. Swimming became a medium for him to channelise his energy,” she shares.

Soon, in 2013, Sriram got the opportunity to compete in sporting events and his first recognition was a fourth place certificate of participation for completing a 50-metre freestyle swimming held at Mandya, Karnataka. “We enrolled him in the competition...but, he didn’t even know that it was one. He had fun, and he was thrilled to receive a certificate. Since then there has been no turning back for Sriram. He trained hard to cross every milestone — from swimming 25 metres in 2013 to completing 5 km in 2018. But even now, when he receives an award he isn’t aware of his accomplishment,” she shares.

In the last five years, Sriram has earned about 27 laurels and recognition to his credit in swimming, cycling and other special races. “His routine involves an hour of yoga every day from 5 am followed by cycling, swimming and working out in the gym and various other therapies. In the evening, he comes back to our store and sits in the front office. He is the boss and likes overseeing the activities,” she smiles.

Vanitha Rajasekaran’s dream for Sriram is to participate and represent the country in the Special Olympics in 2019. “He was selected for the first selection camp, but did not make it into the second camp. But, this still remains a dream. He deserves it,” she asserts.

While the probability of Sriram making it to the Olympics seem uncertain, he has two other goals set. “The first is to swim across the Palk Strait stretch, and the second is to go on an awareness cycling trail from Chennai to Kanyakumari. He completed 25 km in a cyclothon this year...now, he is training to cover 30 km-40 km every day. He was a boy who struggled to stand. Now, he can do whatever he wants,” she beams as she looks at her son on the monitor.