Green is serious biz. no fancy!

Eight days ahead of Vinayagar Chaturthi, Kosapet is bustling with activity. Nestled within the narrow streets of Purasawalkam, Ganesha idols of every height, colour and profession adorn the street.

CHENNAI: One pair of hands kneads clay, another fills the molds, the third pair breaks down chunky clay from a large mound, and another one adds details to a Ganesha idol waiting to be displayed for sale.

Eight days ahead of Vinayagar Chaturthi, Kosapet is bustling with activity. Nestled within the narrow streets of Purasawalkam, Ganesha idols of every height, colour and profession adorn the street sides. Every year, thousands of Vinayagar idols ranging from Rs 10 to Rs 50,000 are sold here.

Famous for sculpting larger-than-life pillayars, Kosapet was once known for idols made of Plaster of Paris (PoP). But, with repeated police crackdown on PoP idols, pillayar makers were forced to evolve or quit the business. Transformation hit Kosapet. 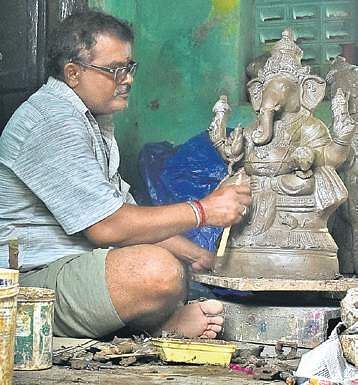 The area quickly moved on to selling recycled-papier mache Ganeshas, which were brought in from Tirupathi, over the last few years. However, with the appeal for clay pillayars on the rise, larger ones with intricate work are being made more often than before.

A Kuppusamy Mohan, a traditional clay idol maker explains that the name Kosapet evolved from ‘Kuyavampettai’ — a place for clay artisans. “Hundreds of families used to make Vinayagar idols here, before. When the PoP wave hit, business flourished here. But many youngsters left the business after PoP idols were banned. Making idols from other material requires a lot of work,” he said.

Now, only about 20 families make earthen idols here. Most of them make short ones for small homes. “Although the overall magnitude of sales has gone down over time, the love for clay statues is steady,” claims PA Rajkumar, a clay Ganesha idol maker. “People have become more aware of how PoP is harmful for the ocean and the fish in it. So even the rich are looking for large Ganesha idols made from clay,” he said.

The largest clay idol made in Kosapet is only about 4.5 ft-tall. “But when customers want larger idols, we order from our friends in Karnataka. We have already sold at least four 10-ft clay Ganesha,” said Rajkumar, adding that artisans have lost their old clay sculpting equipment to the PoP phase that came in-between.

There is demand for clay idols even though it is costlier than PoP or paper idols, he claimed. Take a one-feet statue for example. A PoP Ganesha would cost between Rs 70-Rs 100. A simple clay pillayar costs the same. However, an idol, designed intricately and baked in the kiln, will cost up to Rs 500.

Ten days ahead of Ganesh Chathurthi, the streets look like a house of mirrors with manifold vinayagars staring at you from every direction. Large Ganesha idols of every colour stand tall on the periphery of the streets wearing flimsy plastic covers.

Medium-sized 3-5 ft vinayagars fit themselves between the large ones, on the parked vehicles, on compound walls and house entrances. Dotted among these mid-range ones, clay vinayagars are making a slow, but an elegant entry for this Vinayagar Chathurthi.