The lorries halt for a couple of minutes at various spots on the service road near MGR Research Institute, and discharge raw sewage into the Cooum river during day time as well, said residents.

CHENNAI: On his commute to office, Vivekanandan Perumal, a resident of Maduravoyal has noticed multiple private lorries dumping untreated sewage directly into the Cooum river on the stretch from Maduravoyal to Ambattur for the past one year. Despite repeated complaints to concerned officials, lorries continue to pollute the river in this locality every day, he said.

The lorries halt for a couple of minutes at various spots on the service road near MGR Research Institute, and discharge raw sewage into the Cooum river during day time as well, said residents. 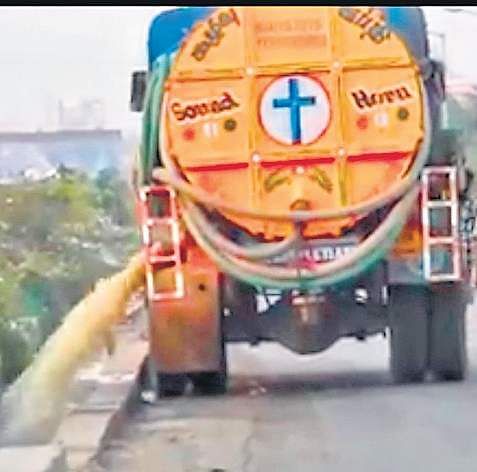 Vivekanandan had filed an online complaint with the Chief Minister’s Special Cell, but the issue was forwarded to various authorities with none claiming responsibility. “The complaint was forwarded to the Thiruverkadu Municipality, and they forwarded it to the Ambattur Municipality, who finally said this issue doesn’t come under their purview. They directed me to complain to National Highways. I filed this complaint two months back, but no action has been taken so far,” he said.

Though two police patrol vehicles are stationed half a kilometre from the place of illegal discharge, residents said police personnel turn a blind eye towards this. “I have informed inspectors at both Thiruverkadu and Maduravoyal police stations many times. They told me to complain to the Pollution Control Board officials about this. But as local politicians are involved, the police have not acted on this issue,” said R Sundar, a resident.

According to the Indian Penal Code, persons involved in such acts can be booked under section 277 (fouling water of public spring or reservoir) and section 278 (making atmosphere noxious to health).
Though the Public Works Department (PWD) is the custodian of water bodies in the city, officials said local bodies should take necessary action regarding this issue. “Residents need to take this issue up with the Chennai Corporation or local Municipality along with the police department,” said an official from Water Resource Department, which comes under PWD.

Similarly, when Express contacted officials from Tamil Nadu Pollution Control Board (TNPCB), they said residents must first lodge a police complaint as private companies are involved in the act. “We only monitor the discharge of industrial effluents and solid waste into water bodies. Hence, if residents raise a complaint with us, we will make a representation to the police as well from our side. But, for an effective solution they need to lodge a complaint with the police,” said an official from TNPCB.