CHENNAI: Dials, minute hands and pendulum. Fifty-year old Roberty Kennedy’s life is time bound. His grandfather gifted him a mechanical clock when Robert was a young boy. It was gifted to his grandfather by the Britishers as an incentive for his selfless work. Later, Robert’s father brought him an electric clock. However, that did not thrill Robert. 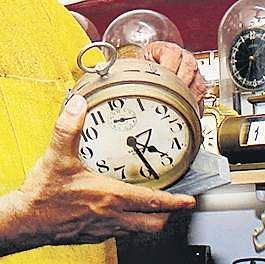 “All my clocks are mechanical and wound. I’m happy that my BSc in Physics has been of some use in helping me understand these machines better. I’ve been treasuring these timeless pieces from scrap shops around the city and sometimes even while I travel. I might not have a vast practical knowledge about the functioning. But, history and theory are my strong areas.

People still call me kuppai (scrap) Kennedy in a humorous way,” he says. Some of his variety includes ship clocks, skeleton clocks, pendulum and marine clocks. “Those days miniatures used to be made out of successful models of clocks in the market. I have a few in my collection, too,” he shares. Other antiques that interest Robert include a vintage cycle from 1940s, betel-leaf boxes, cameras, oil lanterns, trunk boxes, brass vessels, kettles, coffee grinders, boilers, and air pistols.

Robert moved his clocks to a 700-sq ft space above his apartment in Kodambakkam about six years back. He wakes up at 4.30 am and spends some time with clocks — dusting and daily maintenance. Likewise a few hours in the evening. “Earlier, we used to pack them in boxes and store them under beds due to space crunch. Every clock deserves a special place and cannot be lost in the crowd.

These clocks have seen births, deaths and all kinds of emotions when they were at the previous owners. It’s mostly the manufacturer’s that is embossed but the owner’s name remains unknown. Some of my superstitious relatives ask me if there are spirits trapped inside the clocks. So far nothing has harmed me,” laughs Robert flipping through the pages of A treasury of American Clocks by Brooks Palmer. Robert has spent most of his earnings on the purchase of these clocks. He often wonders how these timeless pieces make it to the scrap.

With the help of clock smiths and carpenters, Robert has fixed and brought life to all his clocks. In the last eight years, he has received a fair amount of recognition for his collection. Over 15 people have dropped by to gift Robert a clock from their prized possessions. Robert is protective of his collection. Every piece has a story that takes you back in time. “Germans created a revolution by inventing anniversary clocks. It requires winding only once a year. I tend to forget all the special days.

This is my wife’s favourite because it reminds me of our wedding day,” explains Robert whose oldest collection is a hand-made Great Britain clock which is about 286 year old. Robert has made it to the Limca Book of Records. His next attempt is for a place in the Guinness Book of Records for his largest vintage mechanical clock collection. “Our country does not have a clock museum. I would like to contribute my collection to the public. I’d be happy if people learn about the greatness of these historic clocks,” Robert says.