Where Lakshmi is on Vishnu’s left lap

Mamandur, a small village situated about ten kilometers from Kanchipuram is home to a temple for Vishnu worshipped as Lakshmi Narayana Perumal.

CHENNAI: Mamandur, a small village situated about ten kilometers from Kanchipuram is home to a temple for Vishnu worshipped as Lakshmi Narayana Perumal. Mamandur, which is a rocky area, is a very historic place and is best known for the cave-temples which belong to the reign of the famous Pallava ruler Mahendravarman I (c.600-630 AD) who initiated the rock-cut temple technique in north Tamil Nadu.
This village is popularly known as Doosi-Mamandur as it is near the village of Doosi and in order to distinguish it from a town called Mamandur which is near Chengalpet.

The shrine for Lakshmi Narayana Perumal, which is a structural temple, was constructed much after the date of the cave-temples. The entrance to this small temple is east facing as is the principal image enshrined in the central sanctum. The main stone image of Vishnu is in a seated pose with Lakshmi on the left lap. The deity is four-armed, the upper two hands holding the Sankha and Chakra, the lower right hand in abhaya hasta and lower left hand encircling Lakshmi. 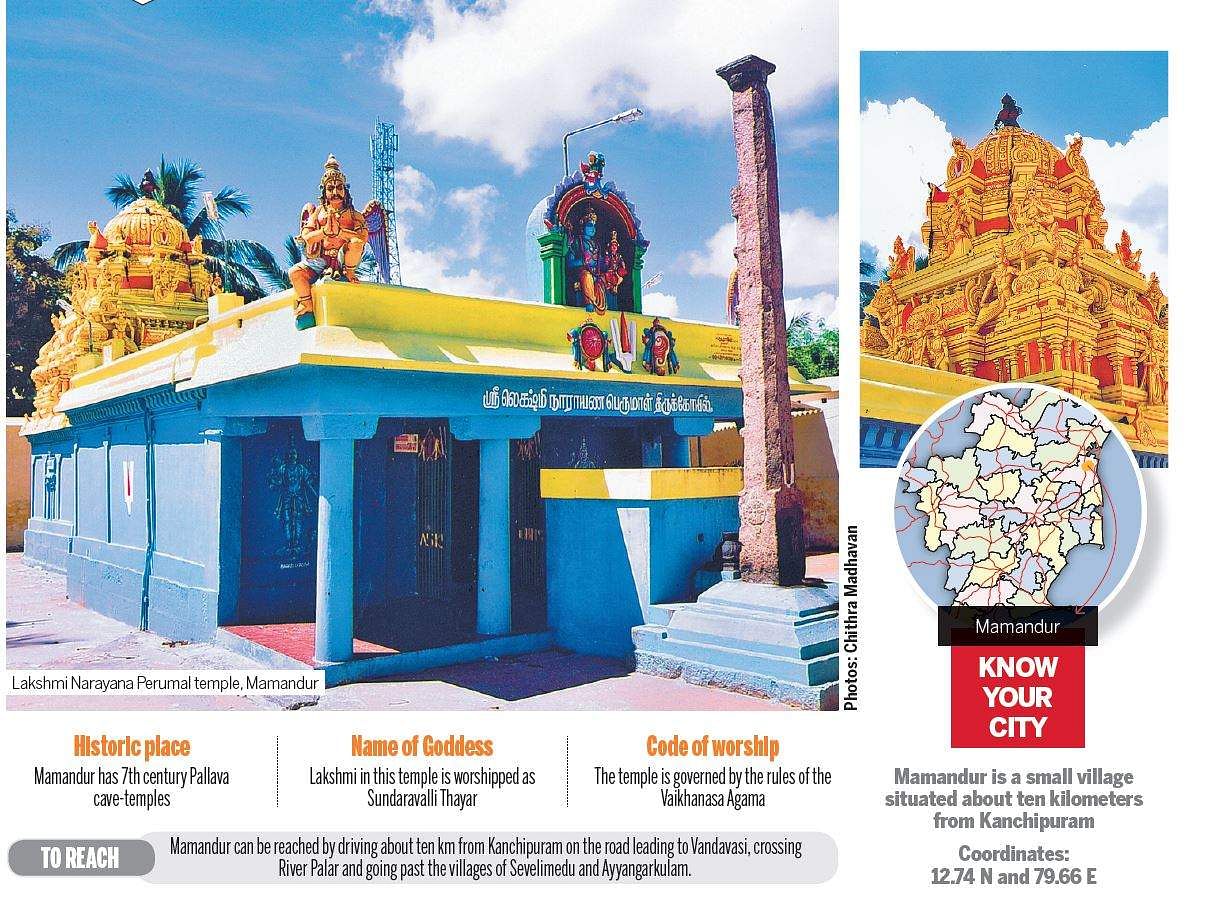 In front of the main sanctum is a smaller one enshrining the image of Goddess Sundaravalli Thayar, whose utsava-murti is worshipped in the Perumal sanctum. Also worshipped in the central shrine are the processional images of Andal, Navanita Krishna and Chakrattazhvar (Sudarsana). In the passage leading to the sanctum are worshipped the Vaishnava devotees (Azhvars) and the preceptors (Acharyas).

Two images of Anjaneya which had been worshipped at the rear of the temple have been consecrated in a small shrine to the left of the main sanctum.Only a few festivals are celebrated in this temple, noteworthy among them being the Moolam asterism for Lakshmi Narayana Perumal when special pujas are conducted.