The school has a strength of over 600 students and is extremely sought after in the neighbourhood as it provides a holistic education to children by offering karate, carrom, chess and Bharatanatyam.

CHENNAI: Over 10 medals of victory weigh down the tender neck of nine-year-old AM Siddesh Hariharan. He carries with him a fat folder full of certificates he won at various Karate tournaments in the State. Siddhesh, who studies at a small government municipal school in Zameen Pallavaram has exceeded his teachers’ expectations by winning almost every tournament he’s been to. Four other students from his school — M Aaris, I Hari Govind Gokul Raj, M Manoj Kutty and T Bharath Kumar — and he have the opportunity to contest in an international tournament in Sri Lanka, but don’t have the funds to travel.

This school is a little different from others. The school has a strength of over 600 students and is extremely sought after in the neighbourhood as it provides a holistic education to children by offering karate, carrom, chess and Bharatanatyam classes after school hours. 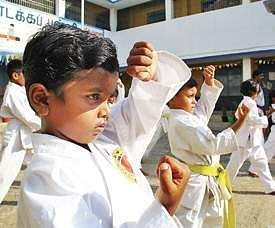 All the extra-curricular activities are funded by teachers, parents and well-wishers of the school and not by the government. “Nearly 40 students learn karate, 60 learn Bharatanatyam, 35 students learn chess and most students play carrom,” said N Karthikeyan, head master of the school.

The students are trained by Sensei RS Srinivasan at `100 a month. A team of teachers from school headed by teacher A Geetha, collected funds, to pay for the classes. She finds patrons every time a student upgrades to the next belt in karate.

The school management has chosen five students to contest at an international tournament in Sri Lanka. For every student, it will cost up to `50,000 for flight, transport, stay (for four days), food and accommodation, explained Srinivasan.

However, no parent has the money to send their kids abroad for a tournament. “This tournament will be life-changing for them, as they will get tremendous exposure through international tournaments. And to go to such large stages from a government school, it will be an inspiration for all students who cannot afford private schools,” said Srinivasan, the Karate master. To provide funds, contact: 9543197917, 9003134677

Wins
When the karate students were recently taken for a South-Indian Karate Tournament in Pudukottai, they won 15 gold medals, two silver medals and 9 bronze medals. Siddesh alone won four gold medals in the competitions he participated in.