Tour de change: This Chennai cyclist is pedalling for a great cause

CHENNAI: Across 13 countries, two continents, 8,646 km and 85 days — Naresh Kumar’s Freedom Ride wasn’t just a test of endurance. The cyclist, who travelled on his tandem bike in an attempt to raise awareness on human trafficking, says that the ride was about vulnerability and humanity. Having started off the ride on February 27 at his alma mater, Dr MGR Educational and Research Centre, Chennai, Naresh cycled with many companions before finally reaching Mumbai to pass through the Gateway of India. Over his 1,300-km journey across India, Naresh recalls small moments of care by locals.

“In Vellore, whenever I stopped by for some tender coconut water, the locals never charged me. Once, a man went to my bicycle, took my water bottles, cleaned and filled them with tender coconut water. He refused money from me,” says Naresh. In Pune, he recalls sharing tea and snacks with the traffic police. In Karnataka, his favourite memories were the food that locals served him. “People say India is a bad place, but the reality is different,” he says. 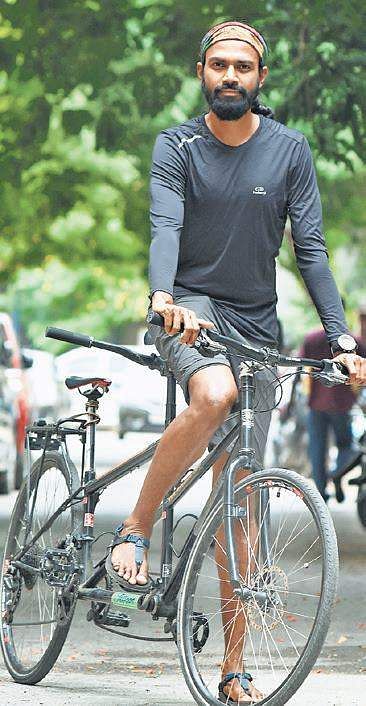 The message
A tandem bicycle has two riders — the captain, or the person in charge of steering and braking, and the stoker, or the person riding in the back seat. During the course of his trip, Naresh says he shared his journey with at least 180 people. “Riding a tandem bike is the perfect metaphor to explain trafficking to people. As you cannot steer or brake, you lose your freedom. This was what I was looking for — I wanted every person who got off the bike to become an advocate for the victims of human trafficking,” he says. Some rode with him for only 250 meters, while some stayed with him for 48 km.

But the experience of vulnerability was not reserved to his passengers alone. Naresh too found himself in helpless situations, which he was saved from by strangers. “If you ever lose your faith in humanity, go to Iran. I assure you, it will be restored,” he says, recalling the time he was stuck in a freezing downpour. A man approached him in a beatdown Toyota and beckoned him to follow him to a small shed. There, he found himself with seven locals.

“They were shepherds. They made me sit near the fire, got me hot tea, and put blankets on my shoulders — some even gave up their blankets for me, as I was shivering. There is nothing like Persian hospitality — they helped a stranger, even as the mud wall leaked,” he recalls. Officials also took to his cause. When awaiting his visa at the UAE embassy, he spoke to the officer about his mission. The officer immediately brought him a spread of Arabic delicacies — from dates, tea to sweets — and told him to contact him anytime, should anything go wrong.

Trigger point
“The idea for this ride came to me when I was in an expedition in Nepal in 2014. A man approached me and began soliciting me for all kinds of things — alcohol, drugs, and of course, girls. He said he could get me as many girls as I wanted, whoever I wanted. The flesh trade was apparent,” says Naresh.

He returned from that trip, and began reading more about human trafficking across the world, and read the stories of several victims. Upon discovering the pain and hardship that the victims underwent, Naresh says he found out more about what he called the “ugly face of humanity”. Over the next five years, he began training for this journey.

His journey took him across India, through Oman, the UAE, Iran, Turkey, Greece, Bulgaria, Serbia, Hungary, Slovakia, Austria, and the Czech Republic, before coming to an end at Germany, in time for a yearly convention held by the Rotary Club. As a member of the Rotary Club of Guindy himself, he decided to reach Hamburg and speak to the Rotarians gathered there about his travels and his cause. At the end of his journey on May 25, he had collected $15,000, exceeding his original goal of $10,000.

“We cannot fight evil if we do not join hands. I believe in the power of vulnerability. This trip changed me as a person — I was vulnerable to many and they, in turn, treated me with nothing but kindness and love. I wanted to create a dialogue so that people know that they can make a change. I wanted to collaborate with as many people as I could, especially young teenage boys, who are the ones who will go towards building tomorrow’s society,” he says.

The route
His journey took him across India, through Oman, the UAE, Iran, Turkey, Greece, Bulgaria, Serbia, Hungary, Slovakia, Austria, and the Czech Republic, before coming to an end at Germany.