Though Manual scavenging was banned 26 years ago, it happens rampantly across the city with hundreds of spectators, including officials, mutely watching.

CHENNAI: It has been over two decades since manual scavenging was banned in the country. But on Monday in the heart of the Chennai city, as hundreds of indifferent motorists were passing by, eight contract workers engaged by the Tamil Nadu's Highways department lowered themselves chest-deep into rainwater mixed with sewage to desilt the stormwater drains. The spot was just opposite to the Government College of Fine Arts on the Poonamallee High Road.

When Express visited the spot in the afternoon hours, four of these workers were not wearing gloves at the time of getting down the drain. None of them were wearing gumboots, considering broken glass bottles were part of the silt collected. At the end of two hours, workers neatly packed around six bags each of silt.

A Highways official said that with the ‘three or four’ machines that were currently available with the department, it was impossible to maintain the entire length of drains under its control. It is not clear why suction pumps or jetroders could not have been borrowed from the city corporation, whose headquarters is merely a few metres away on the same Poonamallee High Road. 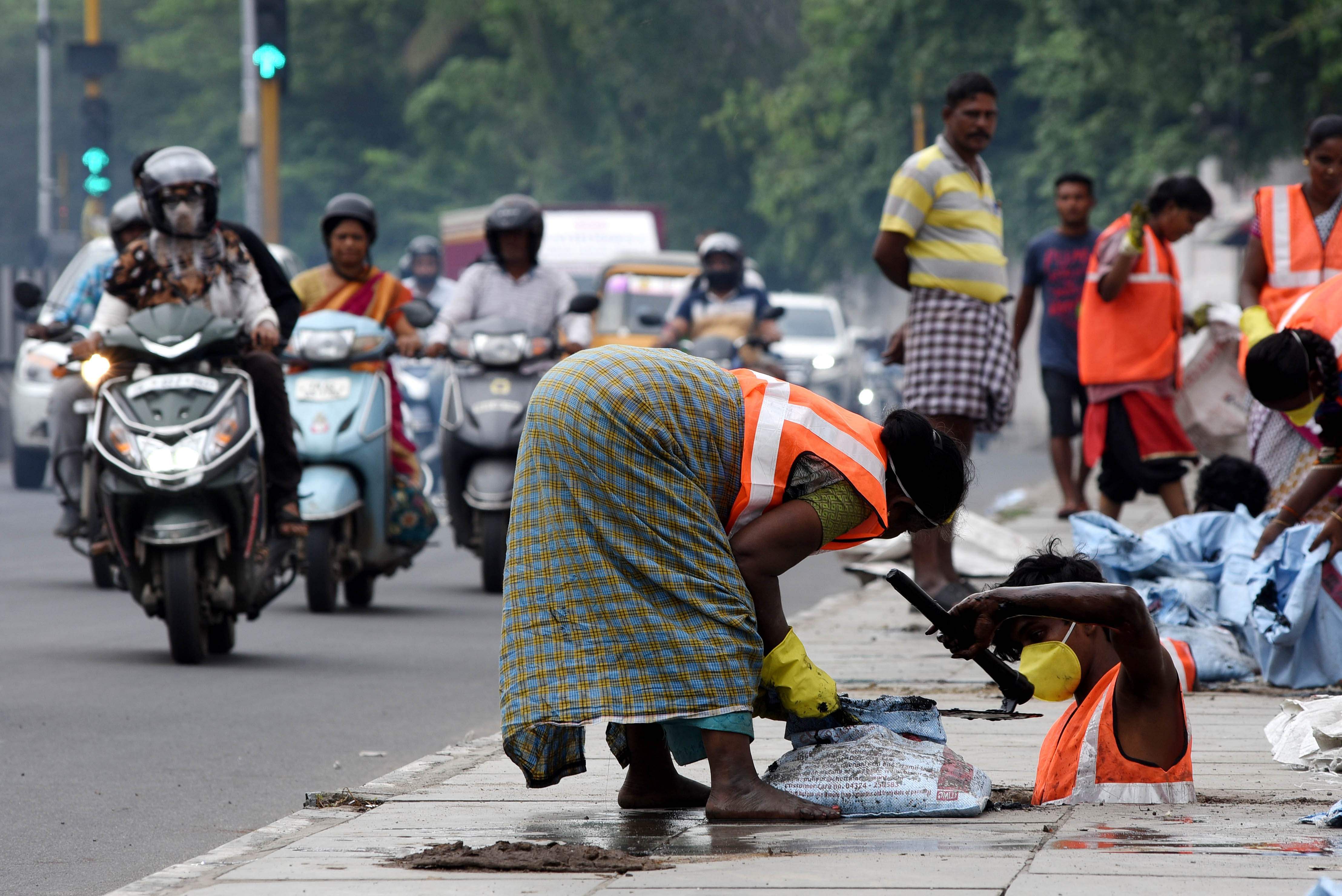 Manual scavenging was banned 26 years ago with the passing of the Employment of Manual Scavengers and Construction of Dry Latrines (Prohibition) Act, 1993. While it may be argued that storm water drains are not sewage lines, illegal sewage connections are connected to stormwater drains in most parts of the city.

“Whenever we find sewage, we inform our supervisor but we don’t know if action is being taken. If you take this part, there is a godown nearby from where I think the sewage is flowing, among possibly other places,” said one of the workers on the job.

Around ten years ago, a manual scavenger had died while cleaning a storm water drain near Mylapore, said A Narayanan, director of ‘Change India’. The solution, he said, lay in a design overhaul of the storm water drain system that does not permit mechanisation beyond a point.

“Inflow of sewage should be plugged completely and as for drains constructed henceforth, the design should be changed,” he said.

In 2009-2010, a special committee was formed for implementing the ban on manual scavenging, that was headed by the secretary of municipal administration and also constituted the managing director of the Chennai Metropolitan Water Supply and Sewerage Board (CMWSSB) and the Corporation commissioner as members.

“For the last two years, the committee has not met. A lot of decisions taken by it in previous meetings have not been implemented either,” said Narayanan, who is also a member of the committee.

However, there has been no records of the civic body having penalised illegal sewage connections to storm water drains so far, said Narayanan.

He said that the number of machines available with them was not enough to mechanise desilting in all storm water drains. “We use it in places that need these machines. It won’t even work in places where there are a few centimetres of sludge. The sludge has to be at one feet for the machines to operate,” the official said.

More from Chennai.
Now we are on Telegram too. Follow us for updates
TAGS
Manual Scavenging Greater Chennai Corporation storm water drains