CHENNAI: Chances of Chennai getting its share of Krishna water from Andhra Pradesh are looking up as recent heavy rains have filled up one of three main reservoirs on the Krishna river. Officials from the Water Resources Department said that on Saturday, 30,000 cusecs was released from Srisailam, the first dam in Andhra Pradesh on the river, to Somasila, the second dam.

This raises hopes for the city but it will be a good one month before water reaches Chennai as two main reservoirs, Kandaleru and Somasila are bone-dry and need to have sufficient levels to transfer water. As per the Telugu Ganga project launched in the 1980s, the neighbouring Andhra Pradesh is mandated to provide 12 thousand million cubic feet (Tmcft) in a year to meet Chennai’s drinking water needs. This water is stored in Poondi and Red Hills reservoirs after crossing the Zero Point at Uthukottai.

Between July and October, the city is supposed to receive eight tmcft of water and the remaining four tmcft between January and April. But due to poor storage levels in Andhra reservoirs, Chennai’s share is yet to be fulfilled. Last spell of four tmcft also was not fully given as the Kandaleru reservoir went dry in February.

The officials said though Chennai has a good chance of getting water, only five to six tmcft out of the mandated eight tmcft will be released. They urged the public not to believe in rumours and said that it would  take a month for the city to actually receive a part of its share.

“There will be transportation losses. And as two dams on the Krishna river are parched, lots of water will be absorbed into the soil. Chances for illegal tapping through high horsepower pumps are also high. All these factors must be taken into account,” added the officials.

As of Sunday (August 11), Srisailam had almost reached its full capacity of 215 tmcft but the storage levels in the other two dams, Somasila and Kandaleru, were only three and four tmcft respectively.
Officials said these levels were well below the transferable level of 23 tmcft and eight tmcft. “Even if inflow to Somasila is increased manifold in the coming days, Andhra Pradesh government’s first priority will be to fill up their dams. Water will be diverted to Nagarjuna Sagar dam which has a massive storage of 312 tmcft against the present capacity of 167 tmcft. Hence, Chennai can expect to get water only by September first week,” said a senior WRD official.

In the wake of the water crisis prevalent in Chennai, which has become less severe due to rains, state government officials have been repeatedly talking to their counterparts in Andhra Pradesh to release Krishna water. 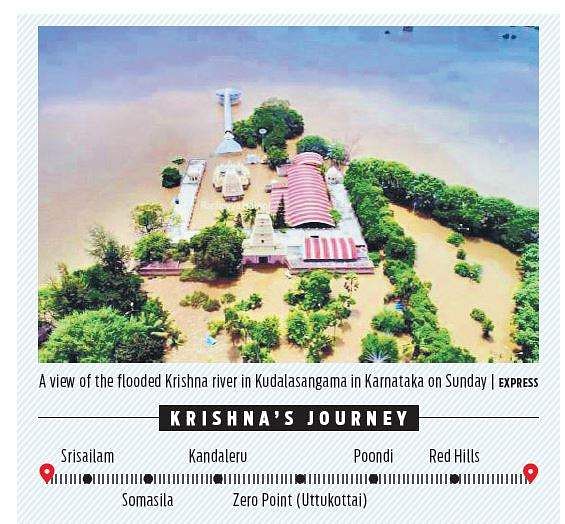