Ancient deity made of fig wood

At Devaraja Swami temple, the presiding God Atthi Varadar is kept at the bottom of the temple tank and taken out for worship for 48 days once in 40 years

CHENNAI: One of the most important temples in south India is the Devaraja Svami (Varadaraja Perumal) temple in Kanchipuram which is one of the one hundred and eight divya desams (temples praised in the Tamil verses of the Azhvars or important devotees of Vishnu). The grand image of Varadaraja Perumal, enshrined atop the Hastigiri hill, is believed to have emerged from a yaga conducted by Brahma.

Varadaraja Perumal is also associated with the Gajendra Moksha episode wherein Vishnu saved an elephantdevotee from the clutches of a crocodile. The important preceptors (acharyas) connected with this temple are Thirukkachi Nambi, Ramanujacharya, Kurattazhvan and Vedanta Desika. The original image of this temple was Atthi Varadar, made from the wood of the fig tree. This magnificent deity is kept at the bottom of the temple tank called anantasaras and taken out for worship for 48 days once in 40 years. This festival is now being celebrated. Perundevi Thayar (Goddess Lakshmi) in enshrined in a separate sanctum under the kalyanakoti vimanam.

The other important shrines are for Yoga Narasimha, Chakrattazhvar, Dhanvantari (God of medicine), Vedanta Desika (famous Srivaishnava preceptor), Ettur Lakshmikumara Tatacharya (who rendered yeoman service to this temple) and others. This temple has many paintings belonging to the Vijayanagara and Nayaka times of the 16th and 17th centuries CE. The best-known ones are on the walls of the innermost enclosure (prakaram) around the main sanctum and depict deities enshrined in the divya desams.

The intricately carved kalyana mandapam deserves special mention. Approximately three hundred and fifty inscriptions in many languages such as Tamil, Samskritam, Telugu and Kannada are seen here. They belong to important dynasties such as the Chola, Pandya, Hoysala, Kakatiya, Vijayanagara and others. Numerous festivals are celebrated in this temple, the most important being the Garuda Sevai and the ther (chariot) processions which are part of the annual Brahmotsavam in the Tamil month of Vaikasi. 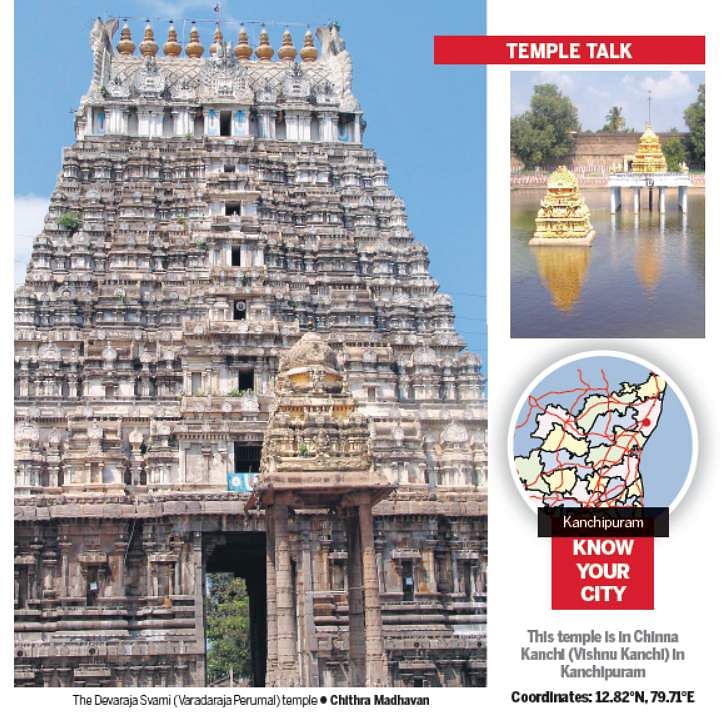