Being Bohra in Chennai

With their presence in the city for over 200 years, more than 1,800 families have found a home here. A walk through George Town reveals the community’s rich cultural stories

CHENNAI: Their favourite food is not biryani and they wear burqas in hot pink, forest green, bright blue and every colour one can imagine, except black. Meet the Bohras, a sect of the Shia Muslims whose history in Chennai dates back to more than 200 years.

“The Bohra community originated in Yemen and later spread to India and Pakistan. In India, they primarily settled in Gujarat before spreading out to different cities. So, we have Gujarati influence on our food, language and traditions. We speak Gujarati with references from Persian and Arabic,” said Tasneem Kutubuddin dressed in a dark pink burqa or rida, their traditional costume. She was leading a heritage walk — Understanding the Bohras in the city — on Sunday at George Town.While women wear ridas that cover their head and body but not their faces,  Bohra men wear a three-piece white outfit and white cap called a topi with gold embroidery. 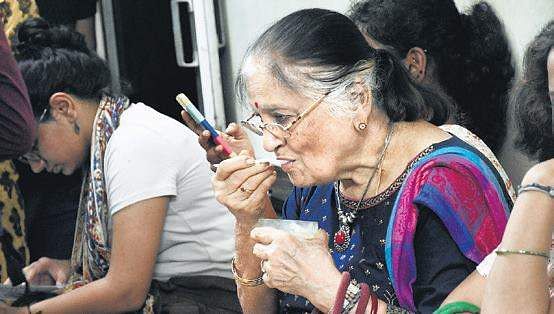 Migrating to Chennai
Mulla Jafferji Ibne Mulla Ismailji was the first Bohra to come to Chennai. He travelled till Arcot in 1790 via the Malabar coast to join his uncle in the bangle business. He later migrated to Chennai in 1793 and set up a garment business in George Town.

“Whenever Bohras migrate to a city, if they are the first ones from their community there, they buy a land for cemetery and prayer. Also, each prayer area has a community hall attached to it where we all dine together. So, this was the first piece of land brought by a Bohra in Chennai,” said Tasneem pointing towards the Mohammedi Masjid in Angappa Naicken Street at George Town.

Chennai has three Dawoodi Bohra mosques — Mohammedi Masjid, Saifee mosque in Moore street, Mannady and the third one at Basin bridge.  Today, more than 1,800 Bohra families are living in the city and are primarily settled in Madhavaram, Royapuram and George Town. The Dawoodi Bohras are followers of the 27th Dai or high priest and can be found in about 40 countries around the world. They have separate administration offices in each city.

The MSB Matriculation Higher Secondary School at Thiruvalluvar Nagar in George Town is set up especially for the children of Bohra community. According to Tasneem, the school follows the Tamil Nadu State Board syllabus along with a Siyat Islamia curriculum.

“About 800-odd children study in this school. For the kids from the community who are studying in other schools, MSB offers a weekend programme to educate them on the history of the community and Quran,” she said.

Communal dining
Food plays an integral part of a Bohra’s daily life. Eating from a thal is a tradition that still continues in many families. A thali is a large round metal plate, around which the family sits, helping themselves from the same plate, course-by-course, during every meal of the day. A lot of their dishes are influenced from the Gujarati cuisine.

Apart from non-vegetarian dishes like pulao and kebab, the cuisine boasts some unique vegetarian dishes including a cold baingan bharta made with curd and spring onion, sev ni tarkari in which bhel puri sev is cooked with onions, and their quintessential dal chawal palida, a combination of rice and dal served with a flavourful concoction of drumsticks, bottle gourd and kokum.

Unfortunately, the Bohra community does not have many restaurants serving the savoury dishes. But, to try their traditional sweets, head to Mannady Street to find sweet shops maintained by Bohris including Hatimy’s and Alambaradar.

Try some of their heady sweet treats like malida (a sweet made with wheat and jaggery), lacchka (a cracked wheat halwa, usually made on first day of the year of Bohra calendar), kalamro (a yogurt based rice pudding) and the famous malai khaja which is also called Bohri puff pastry.

An interesting concept among the Bohras are the community kitchens that are attached to the masjid. “The concept is similar to the dabbawalas in Mumbai. Food gets prepared early in the morning, packed in boxes and numbered. People collect their boxes and replace it with an empty box for the next meal. One needs to pay a nominal amount. Usually, the well-to-do families pay for four to five people, so that the poor can get food for free,” said Tasneem.

The concept of community kitchen began around five years ago when their religious head, Syedna Dr Mufaddal Saifuddin said that women must be freed from the kitchen. So, this kitchen makes lunch for the entire Dawoodi Bohra community across Chennai, every day. The rule is applied across every city and every country.

More from Chennai.
Now we are on Telegram too. Follow us for updates
TAGS
Bohra