To Moscow, with love: Ajay Kamalakaran’s A week in the life of Svitlana

Though peppered with bursts of excitement and multiple hurdles, the story does little to hold up the elaborate framework of the author’s agenda.

CHENNAI: A week in the life of Svitlana is Ajay Kamalakaran’s ode to modern Moscow, an earnest attempt to offer the world a glimpse of the cold city’s ordinary people and their everyday lives. Between 120-odd pages and seven days in the fictional world, he makes sure you get to know quite a bit about the place — it’s architecture (old and new), subway system, civic vigilantism, the divide between the haves and have-nots, the increasing influx of migrants and their place in the way of life, the polarisation over Ukraine and the instability of the Russian ruble. 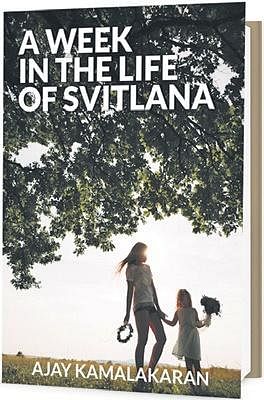 “Russia is no longer the mystery it was during the Soviet days or even from just ten years ago. So many people visit Moscow now. But people come on these short trips and visit the Kremlin, Red Square and the likes — the touristy Moscow. The idea behind the book is to have people to understand how society functions in a city that is as big as Mumbai or New Delhi and has very interesting lives,” explains Ajay.

He attempts to bring this world alive with the story of a single mother. Well, a slice of her story, a week’s worth. We watch Svitlana as she juggles parental duties, a demanding job, money matters and potential suitors. Though peppered with bursts of excitement and multiple hurdles, the story does little to hold up the elaborate framework of the author’s agenda. Despite Svitlana being the narrator of her own story, amidst providing a full-course discourse on life in Russia, the tale somehow does not get personal enough.
Svitlana is introduced to us as being very political. A Ukrainian woman in Moscow, she has no trouble in articulating her thoughts about her motherland, Putin or her fellow Moscovites. However, her ruminations appear forced than inspired — like when three tourists asking for directions has her thinking about Russia’s standing with the rest of Europe and cultural imperialism.

Her conflict and confusion — picturing every man she encounters as a potential partner who can offer stability but wanting to make it in her terms, feeling confident about her good looks but worrying that her ‘fading beauty’ might not help her win any men — may be difficult to empathise with too. Not because they are concerns peculiar to single mothers in Moscow but because they seem to reinforce stereotypes women have been trying to shed for a while now. This is by design, says Ajay. “We are looking at somebody confused and still trying to find her way. This is another problem in Russia: a lot of people believe that once your looks fade, it’ll be difficult to get a man. Hence, she has this internal conflict.”

But some things sit just right with Svitlana’s week. From plumbing issues to finding a partner, her problems are not magically resolved within a week. You don’t get an ending on day 7, for there’s plenty more to her life. Her child, friends, ex-husbands and flirtatious customers come and go, for it’s her story and we have no time to dwell on the supporting cast. The narration is on a run but that’s how things work for you and me in real life, right? You may not like her. What more, you don’t have to.