With heat waves prevalent across the state and South West monsoon yet to bring any relief, the declining trend of groundwater levels continues steadily.

With heat waves prevalent across the state and South West monsoon yet to bring any relief, the declining trend of groundwater levels continues steadily. Nine districts including Erode, Trichy, Coimbatore and parts of Madurai still have rising groundwater levels and fall under the green category. But this number is steadily on the decline. 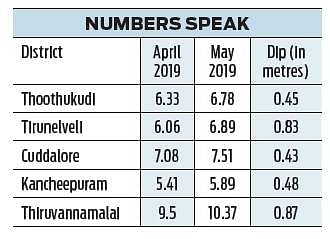 Also, districts surrounding Chennai like Kancheepuram, Tiruvallur, Vellore and  Thiruvannamalai, continue to fare poorly. In a month’s time, Kancheepuram and Thiruvannamalai saw a steep decline of 0.48 metres and 0.87 metres, respectively.

Failing groundwater levels in districts in the immediate vicinity to Chennai is mostly due to over-extraction by private tankers and water packaging companies said, experts. As a result, repeated protests by residents and seizure of tankers by police, have surfaced in the last two months.

Compared to May 2018, levels in Perambalur and Thiruvannamalai have plummeted by almost 4.5 metres. Vellore, Dharmapuri and Thiruvarur have seen a decrease of close to 2.5 metres in a year.

Lack of regularisation
Repeatedly, groundwater resources have been exploited due to the absence of a framework of guidelines to regularise it. The state government has been delaying in passing an order pertaining to this in the assembly for more than eight months. Moreover, revised guidelines released by Central Ground Water Authority which came into effect from June 1, 2019, have not been implemented by the state government so far. Implementation of a water conservation fee, setting an upper limit on how much groundwater can be drawn from where are part of the guidelines.

Officials from the State ground and surface water resource centre, said moderate to heavy rainfall of 600-700mm only can cause a significant rise in groundwater levels and this will happen only by the onset of northeast monsoon in October. Also, a groundwater policy for the state is being formed, which is likely to be passed in July, added the official.“Southwest monsoon will bring us negligible rainfall which will not recharge the aquifer as 75 per cent of the State is made up of hard rocks. Only the desilting of water bodies and natural tanks before October will help,” said the official.

Now we are on Telegram too. Follow us for updates
TAGS
Water Scarcity Tamil Nadu Water Crisis TN Groundwater Levels