Waste management and flood prevention are given focus at Koyambedu due to its commercial nature.

CHENNAI: With Chennai expected to face a drought this summer, restoring natural tanks is the only way forward for a sustainable future in terms of water security and groundwater recharge. A new initiative is being formulated by various bodies including the Chennai Corporation on a trial basis in four areas — Koyambedu, Mylapore, Chitra Nagar and Mambalam.

Greater Chennai Corporation has partnered with 100 Resilient Cities along with the Dutch Embassy, experts from fields of urban design, water conservation and social engagement to carry out this project. They have come up with a proposal to identify and restore natural tanks including ponds, temple tanks and other small water bodies within these areas. This will aid in flood and drought prevention, ensure water security and rejuvenate groundwater levels said members of the City of 1000 Tanks team, which is handling this project. 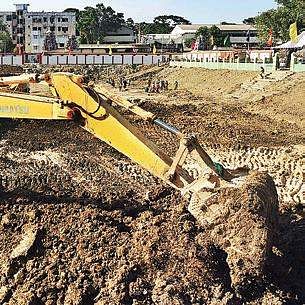 Specific solutions
The four locations were chosen to represent a variety — Mylapore was chosen for its historic value; Chitra Nagar was chosen as it represents a slum tenement; Koyambedu, as it’s an important commercial zone; and Mambalam as it comes under the Chennai Smart City project. “According to our calculation, if the 53 temple tanks located across the city are restored, they can supply close to 50 MLD of water to the city and also recharge the groundwater table. Similarly, if water is conserved in 40 commercial sites like Koyambedu, 40 MLD can be tapped,” said Archana Y, an architect with Madras Terrace, who is a member of this project.

In Mylapore, two temple tanks — Chitra Kulam and Mylapore Tank — will be surrounded by bioswales, landscape elements used to remove debris from run-off water, to direct surface water into the tanks. At Chitra Nagar, it is proposed to construct detention tanks along the boundary of the tenement to avoid flooding. As most houses here have dry borewells, tanks will increase the groundwater level, decreasing the dependence on water tankers and cans. Constructed wetlands will also enable the treatment of waste water on site.

Waste management and flood prevention are given focus at Koyambedu due to its commercial nature. The area which has a population of around one billion, generates close to 200 tonnes of organic waste every day which can be composted, so that run-off water is not contaminated.

Finally, Mambalam, a densely packed area is chronically polluted with raw sewage and garbage. Cleaning up of the Mambalam Canal will make a big difference to the water scenario. “People from different socio-economic groups collude at Mambalam. Also, real estate and the retail sector is booming here. During flood or drought, both of these are crippled. Hence, reviving the canal and making the buildings adaptive in nature will improve aquifer levels considerably,” said Archana.

Now we are on Telegram too. Follow us for updates
TAGS
Greater Chennai Corporation natural tanks restoration