All these concerns have been addressed by WCTT’s invention, where no water is used - meant no waste water discharge - making the entire chrome tanning environmentally sustainable.

CHENNAI: Chennai-based Central Leather Research Institute (CLRI) has finalised a $1 million deal with the Ethiopian government as licencing fee to transfer home-grown Waterless Chrome Tanning Technology (WCTT), which is being hailed as a game-changer for the leather industry. 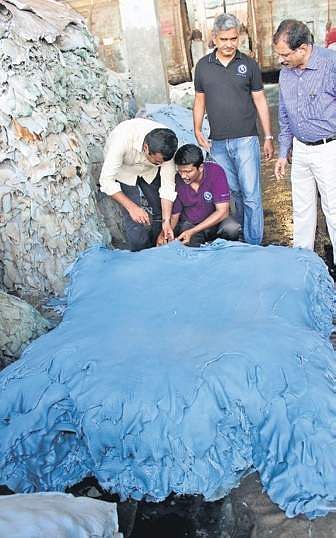 Leather tanneries use large volumes of fresh water and are often accused of polluting water bodies and soil by discharging highly toxic chromium contaminated water. After the Tamil Nadu government made Zero Liquid Discharge  mandatory and the Central Pollution Control Board bringing stringent pollution norms, tanneries are forced to spend a bomb on effluent treatment because removing chromium from the waste water is expensive.

All these concerns have been addressed by WCTT’s invention, where no water is used - meant no waste water discharge - making the entire chrome tanning environmentally sustainable.   P Saravanan, Head (Project Planning & Business Development), CLRI, told Express that WCTT is patented and has been adopted by 70 tanneries in India, of which about 22 are in Erode, Ranipet and Ambur of Tamil Nadu. “An MoU has been signed with the Ethiopian government and $1 million licensing fee was agreed upon. All tanneries in Ethiopia will be adopting WCTT. Besides, talks are in advanced stage with Sri Lanka, Vietnam, South Africa, Kenya, and Romania,” he said.

Official estimates show that chromium is the most sought-after tanning agent. Of the 18 billion sq ft of leather produced globally every year, nearly 16 billion is made using chromium. India produces about 2 billion sq ft of leather, of which 32 per cent is produced in Tamil Nadu. Annually, about 70,000 tonnes of basic chromium sulphate is used. The average uptake (absorption) of chromium by leather pelts during tanning is only 55 per cent out of chrome tanning agent offered. This means, 30,000 tonnes of chromium tanning agent remains unabsorbed and gets discharged along with waste water, which is a huge environmental risk.

Chief Scientist J Raghava Rao, who headed the project, said using WCTT tanneries can completely eliminate two processes. Tanning process consists of five stages -- liming, de-liming, pickling, basification and chrome tanning. “In WCTT, the de-limed pelts are subjected to pre-treatment. Basic chromium sulfate will be added to the drum without any water. Pickling and basification need not be done so discharge of water with high salinity and chloride can be avoided.”

Technology outline and benefits
1. Complete elimination of water input for chrome tanning
2. No discharge of waste water from chrome tanning
3. Total elimination of pickling and basification
4. Suitable for both hides and skins
Water saver
1. One tonne of hide requires 1,000 litres of water in conventional process
2. 7 lakh tonnes of hides are processed annually, which means 700 MLD of water is saved