Co-author PS Sivaprasad, who has documented Niligiri Orchids, said the book is a treasure trove for any budding researcher. It also acts as a guide for the forest department and field managers.

CHENNAI: For the first time, an IFS officer along with a few other ardent nature enthusiasts, have done a photographic documentation on the endemic flora of Western Ghats found exclusively in Anamalais and unearthed 31 new plant species, which were not found in annals of “Flora of Anamalais” authored by CEC Fischer, the then District Forest Officer of Coimbatore South, almost a century ago in 1921.

About 180 endemic plants species, which are mostly unknown, critically endangered or nearly  extinct, have been carefully chosen and brought out as a book Endemic Flora of Western Ghats-Anamalais volume-1, which was released on Thursday as part of International Forest Day celebrations organised at Guindy Children’s Park. 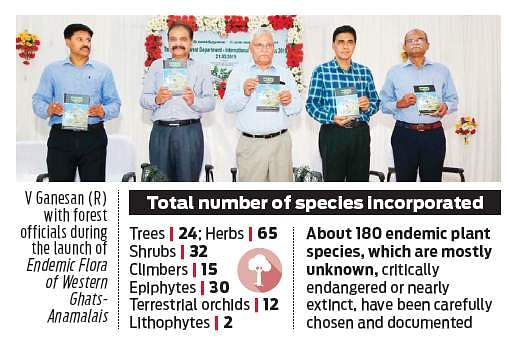 V Ganesan, first author and Chief Conservator of Forests (CCF) of Anamalai Tiger Reserve (ATR), told Express that this was a maiden attempt by his team after Fischer’s work in 1921 exploring the length and breadth of Anamalais.

“During the course of our exploration we came across interesting wild banana species represented by Musa acuminata variety Matti and Namarai. Now, the latest project, which is my lifetime effort, was initiated with the intention of bringing out an exhaustive photographic documentation of the endemic flora of Anamalais. To start with this Volume-1, comprising 180 species will throw light on some of the unknown plants, which are critically endangered and presumably extinct. Our research continues and the results will be published in the form of future volumes which will add more novelties from Anamalais. The next volume is likely to be out in a month’s time,” he said.

Co-author PS Sivaprasad, who has documented Niligiri Orchids, said the book is a treasure trove for any budding researcher. It also acts as a guide for the forest department and field managers. Another co-author B Subbaiyan, who did Ph.D in plant taxonomy and currently documenting the plant inventory of the ATR, says local tribes use leaves of Ceropegia schumanniana and Ceropegia fimbriifera as seasonal food. These plants are known to reduce kidney stones and fights obesity. “The two species stocks have reduced drastically.”

H Malleshappa, Principal Chief Conservator of Forests (Head of Department), said the book will be useful to all who are interested in understanding the plant wealth of Western Ghats, especially Anamalais.

Now we are on Telegram too. Follow us for updates
TAGS
IFS officer's book