Hymns, kathas, kirtans and langar — this Guru Nanak Jayanti, members from the 500-family-strong community set the mood for festivities

CHENNAI: Over the last decade, the 500-odd Sikh families in Chennai have blended with the local culture with a fond fierceness. They have involved themselves in many fields - real estate, automobile parts, catering and hospitality services - to give back to the city they call home. On the occasion of the 550th birth anniversary of Sri Gurunanak Dev, City Express talks to families from the community about the day’s significance.

“My father came to Chennai in 1955 to set up an automobile spare parts shop on General Patters Road. I was born and brought up here. We have imbibed the local culture with our tradition over the years. I had innumerable chances to relocate, but I refused because I could not envision myself living in any other place. Like me, there are 500 other families who have stayed back and made this city their home,” says 62-year-old Navtej Singh.

The Guru Nanak Satsangh Sabha located on GN Chetty Road sees nearly 7,000 people offer their prayers. This includes the floating Sikh population and those from other communities.

The celebrations begin at least two days in advance with the reading of the Guru Granth Sahib, the community’s holy book. This continuous, two-day reading of the book that marks the festivities’ start is called Akhand Path.

On the day of Guru Nanak Jayanti, the celebrations begin before dawn at around 4 or 5 am. People head to the gurudwara and sing morning hymns. After this, they assemble for a reading from the holy book called the katha or reading session. Then, devotees attend kirtan where songs are sung in praise of Guru Nanak.

“We light diyas at our home and prepare karah prashad (wheat halwa), before heading to the gurudwara. Each and every person in the community makes it a point to visit the gurudwara on this day. Being in a place that has a very small Sikh population, this is an extremely joyous day because you get to meet everyone and spend time with them,” says Navtej. 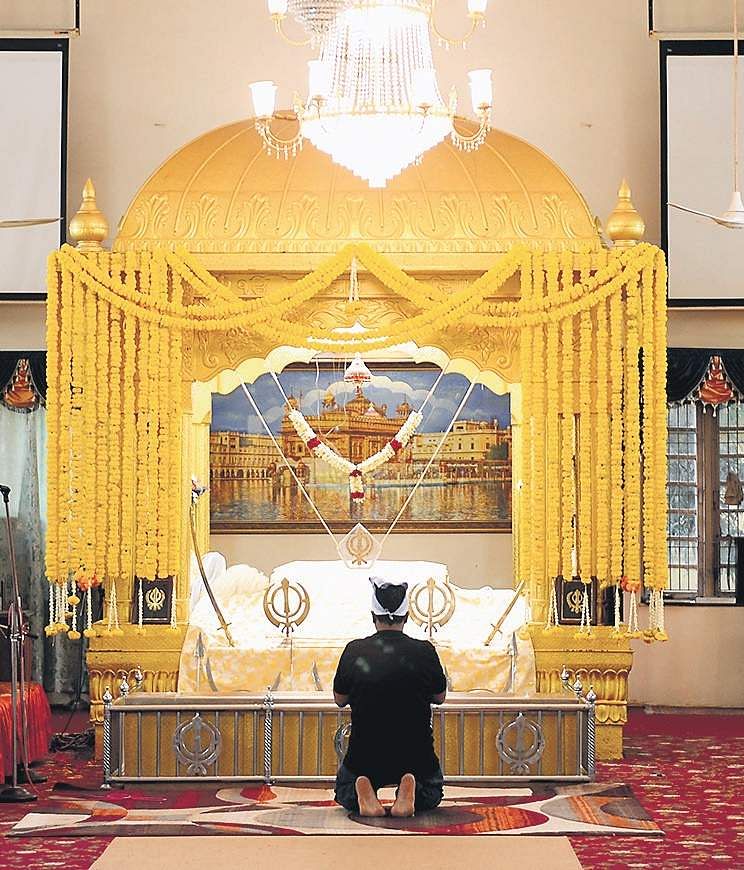 Apart from the families settled here, there is a floating population of more than 1,000 Sikhs who come here for work. They too, visit the T Nagar Gurudwara on Guru Nanak Jayanti.

“Having come from Mumbai, a place where Sikh population is high, I can say the magnitude of the celebrations differ. But, the spirit is the same in Chennai and that amuses me. I have been here for two years and on this one day, I feel like I am back in my hometown,” said Harsimran, who works at an IT company on OMR.

Elaborating on the plans at the Gurudwara for this year, Harbinder Singh, member of the State Minority Commission, Government of Tamil Nadu, says, “We have special teams coming from Punjab to do kirtan with and perform kathas. The programmes will begin early in the morning and go on till 2 pm. It will once again begin at 6.30 pm and end only after midnight.”

One of the major elements of the festivities is the langar, or community feast. This is served to all who come to the gurudwara irrespective of their caste, creed or religion. On Guru Nanak Jayanti, there are special delicacies made as an offering to the founder of the Sikh community. The food is made in a community kitchen in the gurudwara itself. The food is served with love in the spirit of service and devotion. You will find several people, not just Sikhs, coming to the gurudwara to attend the langar.

“Apart from the langar, this year we also have stalls set up at the gurudwara to sell pakodas, jalebis and other delicacies,” says Harbinder.

The community is also making an effort to take Guru Nanak’s teaching to the younger generation. Manjit Singh Nayar, secretary of Gurunanak Educational Society shares, “We are trying to take teachings that are relevant to our day-to-day lives, like respecting parents, maintaining ecology, truthful living, harmony and gender equality, to the next generation to increase participation.”
Manjit says the Sikh community is so closely knit in the city that he recognises most of them by their first names. “Most of us are settled here for long now, so everyone knows everyone. And some of us identify ourselves as true-blue Chennaiites. The city was there for us in times of need and we gave back our hospitality whenever we could,” he shares.

Manjit is also the assistant commandant general for Chennai City Home Guards. During the 2015 floods, Guru Nanak College established a major langar kitchen. They were the first ones to reach the affected people with 50,000 food packets daily. They mobilised police vehicles and gave food through them, and conducted rescues.

Parminder Singh Anand, a businessman who has been living here since 1998, says, “My family speaks different dialects of Tamil. During Guru Nanak Jayanti, when we meet people in our community, we also realise how close we have grown to the city. We feel like home, away from home.”

Now we are on Telegram too. Follow us for updates
TAGS
Sikh chennai Gurudwara Sikh community