With 14 cases in 10 years, IIT-Madras tops list of suicides among contemporaries

An RTI report reveals that a whopping 52 suicides were reported across eight IITs in the last 10 years.

CHENNAI: Fathima Latif’s suicide is just the tip of an iceberg. A compilation of data accessed through several RTI responses reveals a whopping 52 suicides were reported across eight IITs in the last 10 years. Of this, IIT-Madras tops the list with 14 suicides. This year was the worst for IIT-M with four student suicides, including the ‘mysterious’ death of Fathima who was found hanging in her room.

So, what ails these top-notch engineering institutes? Many students and PhD scholars Express spoke to describe the ‘toxic environment’ at these institutions include, high expectations, solitude, cutthroat competition, apathy, and peer pressure, apart from general discrimination. “All these can lead to mental health issues,” they say. 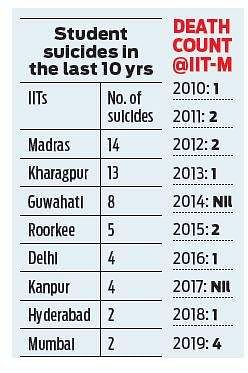 Officials at the IIT-M had a standard response. The institution has a professional counselling system called “Mitr/Saathi”, which offers both face-to-face and online counselling by psychiatrists and doctors. There is also a wellness-team and some trained senior students and faculty who are ready to help all time.

“The structure enables preventive and reactive measures with respect to the emotional wellbeing of students. The institute also works on early detection and prevention as well. A new happy hours with faculty is being introduced in the freshers’ hostels providing an opportunity for an informal interaction between students and faculty once a week,” IIT- M said to Express.

A student counsellor said: “IIT Madras has over 8,000 students, and there are hundreds of them who seek assistance for various mental health issues. The institute’s image cannot be tarnished based on few unfortunate incidents. I agree more can be done.”

Psychiatrist Soumitra Pathare, who helped draft India’s new mental health law, said “IIT administration need to understand that there has to be a multi-dimensional approach. Assure students and families that they will not be penalised for having either mental health issues or having suicidal thoughts. They also need to review their teaching/curriculum and methods to see if this adds to the stress.”

The administration needs to commit itself to stamping out stigma against mental health, all forms of discrimination on their campus (eg. caste, religion, rural/urban), he said. Replying to a question in Rajya Sabha in July this year, Minister of Human Resource Development, Ramesh Pokhriyal, said several HEIs  have engaged counsellors or psychologists.

The question on data regarding number of counsellors or psychologists working in HEIs and their average per HEI was not answered. Gaurav Kumar Bansal, Supreme Court advocate and mental health activist, who filed RTIs and compiled the data on suicides in IITs, said, "The government and IITs are just not doing enough."