CHENNAI: The city corporation on Tuesday recorded 695 residents as having possible symptoms of COVID-19, out of which, 291 people have been cured of symptoms and the possibility of having the virus has been ruled out. Since Sunday, all houses under the corporation limit are being monitored for symptoms related to COVID-19, and the exercise is expected to continue for the next 90 days, as announced by Minister SP Velumani. So far, the civic body has surveyed a total of 37,11,531 households across 15 zones, of which 9,95,953 were done on Tueday alone. 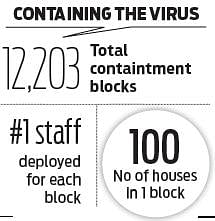 Barricades on roads
The city police on Tuesday, closed roads leading to the houses of those tested positive, in an attempt to prevent community spreading. Barricades were placed at streets in Choolaimedu, Tambaram, Virugambakkam, Vadapalani, Velachery, Mylapore, Purasawalkam, Periamet, Egmore and Alwarpet, restricting public movement.

“It was necessary to isolate the area. We have also advised people not to step out even to purchase essentials until the health department gives a go ahead,” said a police officer.The city police commissioner AK Viswanathan said, the seized vehicles will be returned to their owners only after the lockdown was over. Speaking to media, he said, “Every individual can purchase essentials within one kilometer from their houses, and it is not necessary to leave the house everyday.”

Terrorism wiped out from Kashmir, now it's turn of Naxalism: Yogi Adityanath in Bihar

China asks US to walk with it instead of continuing provocations