When the Idols sit idle

As the virus-induced lockdown tones down the festive cheer, the future of Kosapet’s doll-makers appears sombre, but hope stays afloat

CHENNAI: Selvi, a four thgeneration artisanal potter-cum-dollmaker, dips a brush into a bowl of powder-blue paint and begins coating a one-foot-tall clay Krishna idol. Once the dye dries, she picks a few more colours — candy pink, orange, vibrant yellow, green and shimmery gold — and adds accessories to the doll.

After letting it dry under the sun for a few hours, she polishes the idol and carefully places it amid other vibrant miniature Krishna and Ganesha dolls, which are waiting to find a home. While her 200 sq ft house in Kosapet looks nothing but vibrant and festive, the reality is far from what we see. “Usually, we start making these dolls at least two months ahead of Krishna Jayanthi and Ganesh Chaturthi. But due to the pandemic and the lockdown, we started work only in July after the relaxations were announced. We are now waiting for customers to buy them. The business has so far been gloomy,” she shares.

Like Selvi, the 40-odd multi-generational potters at Kosapet, who rely primarily on pottery and dollmaking, are facing the brunt of the pandemic. With buyers still hesitant to step out, the business has taken a major hit. But they remain hopeful. “Many customers seem to have assumed that due to the pandemic, we might not have made the dolls this year and haven’t approached us yet. Once they get the news, I am sure individual buyers and small-time vendors will start coming,” she says. S Manikandan, another fourthgeneration doll-maker, who has been in the trade for over 15 years, sits in his house, kneads and rolls out moist clay to fashion miniature idols out of them.

“Usually, we make anything close to 500 idols, but this year, I have made only 100 to 200. Though some vendors are visiting the neighbourhood to purchase these dolls, the overall business has been dull due to the pandemic,” he says, as he dries the clay dolls. “Once they dry, we will paint one set and leave the rest as it is. Customers will pick whichever one they like,” says Manikandan, who is uncertain about the profits he will make this year. “Usually apartments, private associations, and communities from different areas place orders. This year, we’ve not received any orders so far. 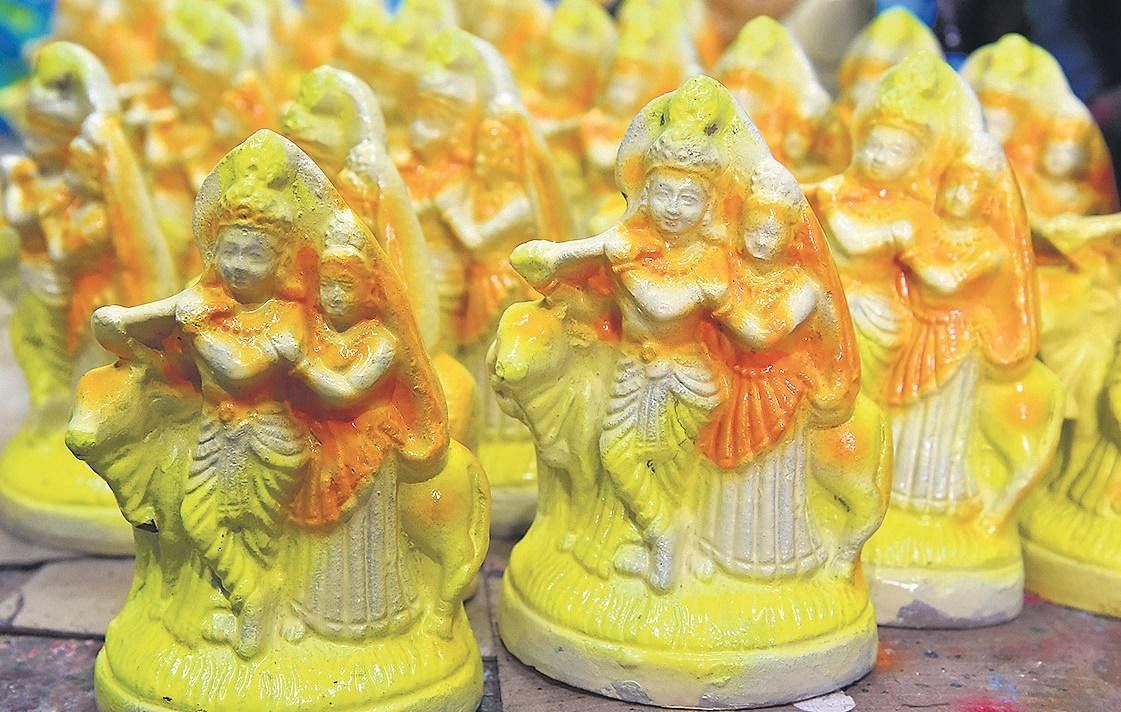 That is worrying,” he opens up. Nestled within the streets of Purasaiwalkam, Kosapet usually hums with activity during this time of the year. Buyers from across the state, and even country throng the neighbourhood for their quality products. A few weeks before Ganesh Chaturthi, towering idols of the deity start arriving at the locality and adorning the streets.

Priced at anything between Rs 5,000 to Rs 50,000, these idols are usually taken to pandals across the city and later immersed into the sea on the tenth day of the festival. “Ganesha idols of different heights, colours and themes are usually sold here. But this year, we have made only smaller dolls as we aren’t sure if the bigger dolls will be sold. We are awaiting government orders, and clarity about the regulations to be followed during the festival. Our sales will be based on that. But if we make no sale during the festive season, making ends meet would become harder,” he notes.

On average, the Kosapet doll-makers make and sell a little over one lakh dolls a year. But the pandemic has made them tread this period carefully. “We are making dolls only in hundreds. We take loans and borrow money to procure the raw materials and make the dolls. If there’s no profit, it will be hard for us to repay the sum after the sale period. So, we don’t want to make too many. Last year, we saw only about 60 per cent sales; this year, I think, it will go further down by 20 per cent. The future looks uncertain,” shares Nagarajan, who has been in the trade for over two decades. 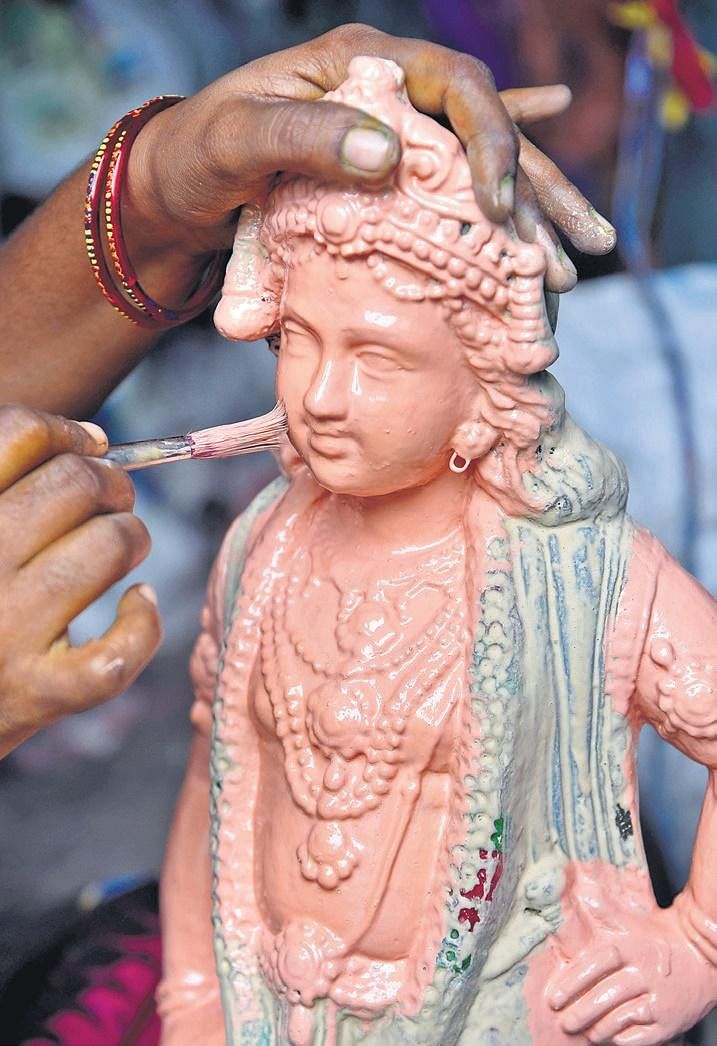 P Govardhanan, a fifth-generation sculptor tells CE that the cost of raw materials and transportation have also escalated due to the lockdown. Manikandan concurs. “The cost of clay, paint, other raw materials and that of transportation has increased. The materials that I procured for Rs 2,000-Rs 2,500 last year has now spiked to Rs 3,500- 4,000,” shares Manikandan, who is now gearing up for wedding orders, and making dolls for Golu. Pointing to a six-feet clay peacock doll, he says, “If we start making these now, we will be able to take orders during Navaratri this year and the wedding muhurtham period, starting January. Having said that, I don’t want to write this year off.

I am still hopeful,” he says, with a glint of optimisim. Manikandan’s father, sexagenarian Sambandhamoorthy, who makes clay dolls at Sachidanandham Street, off Mooku Theru, worries that with several Kulalar families abandoning the craft in search for other better prospects, it might soon become a lost art. “Earlier there were over 2,000 families in the area who were into doll-making, but now it has dwindled to a mere 50. Of them, only a handful make dolls around the year.

The rest consign idols based on orders. Many have taken to other professions or migrated to different areas including Adambakkam, Valasaravakkam , Saligramam, Tiruvallur, Mambakkam and Periapalayam,” he says, noting the high cost of water and dearth of fine clay as primary reasons for such a mass exodus. “The pandemic has only made the sustenance of the art tougher. But we will fight this out,” he shares. Here’s hoping the festive season brings new renewed spirit and business in their lives.