Residents of Sathyavani Muthu Nagar stood in the sewage, protesting that they did not want to be shifted to Perumbakkam, an area with myriad social and civic problems, about 30 km from the city

CHENNAI: With their bodies reeking of sewage and hands shivering, about a dozen men and women came out of the sewage-laden Cooum River after standing in it for almost five hours straight.

Unable to fight the might of government officials and police, the residents of Chennai’s Sathyavani Muthu Nagar on Wednesday decided to get inside the polluted Cooum River to protest against their eviction.

Located near the Central Railway Station, SM Nagar was one of the largest slums in the country which had close to 2100 families. However, over the course of two years, close to 80 percent of the families have already been evicted for river restoration projects. The residents stood in the sewage and shouted that they did not want to be shifted to Perumbakkam, an area with myriad social and civic problems, located about 30 kilometers from the city.

Solomon, one of the residents who was protesting, questioned why the officials cannot build them houses in the city limits itself. “Perumbakkam has so many pre-existing problems and we don’t want to go there at the cost of our livelihood,” he said.

Earlier that day, as part of the Chennai Rivers Restoration drive, authorities bulldozed as many as forty houses in the area, leaving many homeless. Since then, from about 1 pm, the group of residents stayed neck-deep in the sewage water till 6 pm, without any food or water. 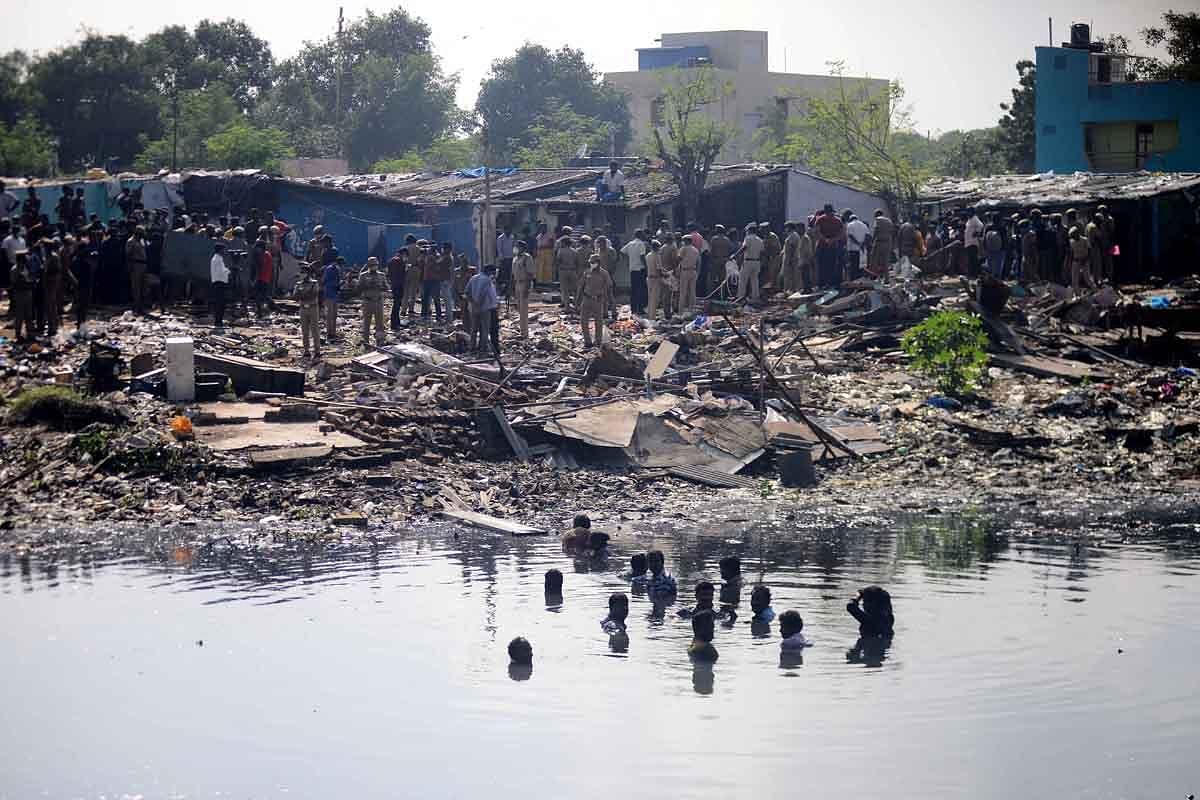 “We are homeless. They (officials) demolished our houses brutally today morning and threw our furniture and equipment outside, while we were still living there. We have not received any allotment in Perumbakkam too. Overnight, we have been pushed to the road,” lamented Kavitha, one of the residents, who had also gotten into the Cooum.

After the protests began, the authorities stopped demolishing houses temporarily but the protesters wanted all the officials to leave the place taking back their equipment.

Siva, a resident, blamed politicians for putting the residents in this crisis. He claimed that politicians were trying to divide the community members from within and by paying money to vacate.

“Politicians want to sell the land on which we are living. They have already convinced a section of community members who were relocated. We know what kind of suffering they go through in Perumbakkam without food and a job,” he said.

The main demand of the residents is just that they need housing within the city limits as most of them are labourers, auto drivers or from other informal sectors. They said that they cannot travel from Perumbakkam every day and they are also aware of the existing issues there from relatives and news reports.

“We will not move from here and if officials try to evict us tomorrow, protests would increase. If needed, we would also sacrifice our lives rather than move to Perumbakkam,” said Siva, adding that from their livelihood to children’s education, everything would get affected if the residents are relocated.

During the protests, film director Pa Ranjith came forward to give support to the local residents. He also held talks with the officials to allot houses for residents within the city limits.

“This is a worrisome thing to see residents being relocated to the outskirts of the city. They must be provided all the benefits within the city itself,” he said, speaking to mediapersons.

On the other hand, officials are determined to relocate the residents in the next three to four days.

An official with the Chennai Rivers Restoration Trust said the relocation drive would continue once the present bottlenecks are addressed.

“We have been conducting camps to convince the residents to relocate. So far, 1745 families have been relocated and 347 families are presently living here. The remaining would be relocated soon,” the official told The New Indian Express.

On Wednesday, close to 40 houses were demolished and officials said six families were allotted houses in Perumbakkam.

Now we are on Telegram too. Follow us for updates
TAGS
Cooum Chennai Perumbakkam Sathyavani Muthu Nagar