Anxious night under the clouds as eviction drive continues

Officials return to evict remaining residents in Sathyavani Muthu Nagar; house-demolition continues as residents get tokens for resettlement in Perumbakkam

CHENNAI: Chennai is more a land of dreams than of its own people. The ambitious drive to beautify the city is coming at a heavy price — the livelihoods of thousands of citizens who built and maintained both Madras and Chennai. The drive has been displacing them, far far away from the heart of the city, where they once lived. Yesterday it was Thideer Nagar, today it is Sathyavani Muthu Nagar.

A day after 30 homes were razed, leaving hundreds homeless, officials returned to the slum to clear out the remaining residents. The families that refused to relocate to Perumbakkam tenements, which are a good 30 km away, spent a sleepless night under the cloudy skies, hoping it would not rain. A lucky few were taken in by neighbours who had space to share. “We had to depend on our neighbours for food. We had to keep an eye on our possessions all the time because they are now out in the open. We struggled for privacy to even relieve ourselves,” says 45-year-old Amudha, a daily-wage worker. Till noon, public representatives in the neighbourhood tried talking to and convincing the officials. But nothing worked. Eviction resumed at 4 pm.

A large posse of personnel was deployed, anticipating protests similar to Wednesday. The police, to begin with, detained a group of CPI(M) activists camping at the site, demanding a better deal for the affected. Demolition of houses continued on Thursday, while TNSCB staff also issued tokens to those evicted. The token, they said, would help them secure a tenement in Perumbakkam.

The residents have to take the tokens to a camp office set up in the vicinity. There, they would receive their actual allotment orders. Those evicted would also be given food for three days and a relocation allowance of Rs 5,000. “Besides this, they would be given a monthly subsistence allowance of Rs 2,500, which would be deposited in their bank accounts,” said a staff member. 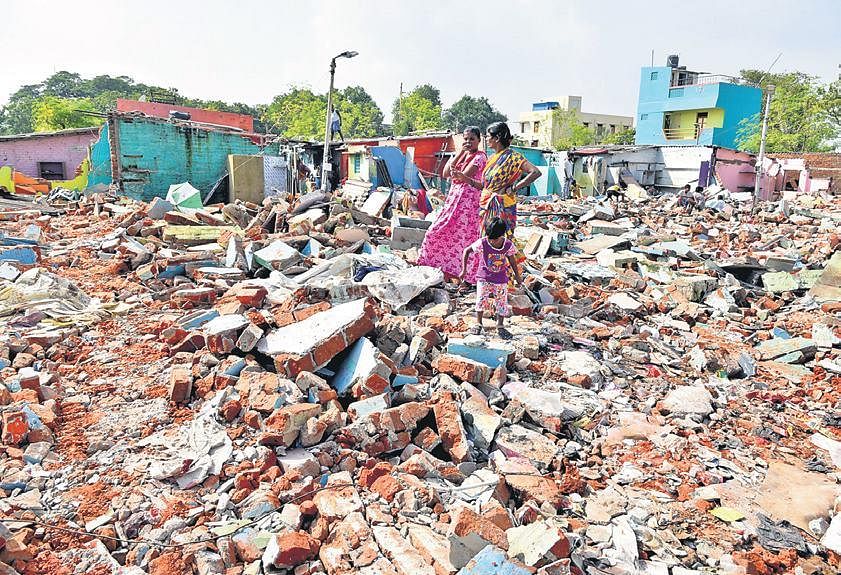 The Wednesday protest by residents, who entered the dirty Cooum River to stop the eviction, attracted widespread media attention. On Thursday, one of the protestors claimed he was beaten up by the police for entering the river.

“I was taken to the Triplicane station where they demanded that I identify other protestors, and beat me up,” said the man who did not want to be named. “Then, they demanded that I give an undertaking not to protest again.”  Police, however, denied the allegations. They said the man was picked up as he was drunk and was creating a ruckus. He was let off after the undertaking was taken.

Speaking to Express, many locals said they were disappointed as much with the local DMK legislators as with the government officials. “None of them (legislators) turned up to support us while we are going through a tough time,” rued Balaiya, who identified himself as a social worker.

Locals upset with govt, DMK legislators alike
Many locals told Express they were as disappointed with the local DMK legislators as with the government officials, as none of the legislators showed up to support them in their protest. The families that refused to relocate to Perumbakkam tenements, which are a good 30 km away, spent a sleepless night under the cloudy skies. The lucky ones were taken in by their neighbours

Now we are on Telegram too. Follow us for updates
TAGS
eviction drive