The State government on Tuesday released its draft action plan on climate change. It proposes to carry out 199 planned activities in seven key sectors by 2030.

CHENNAI: The State government on Tuesday released its draft action plan on climate change. It proposes to carry out 199 planned activities in seven key sectors by 2030. The voluminous document has been uploaded on the Department of Environment’s website, and public have been invited to give their suggestions.

The plan has been prepared in sync with Nationally Determined Contribution, which India submitted under the Paris Agreement in 2015, said environment secretary Shambu Kallolikar. “The total resource requirement is expected to be Rs 3.24 lakh crore. After accounting from all possible sources, there will still be a gap of Rs 1.04 lakh crore,” he said. The project’s implementation would effectively start from January 2021.

A total of 24 projects are proposed with focus on housing, drinking water, urban development, sanitation, pollution and making green urban spaces. Officials told Express that the new action plan will be continuation of the previous plan implemented between 2012-17.

The biggest worry, however, is water resources which the draft plan seeks to address. Tamil Nadu constitutes 4% of India’s land area and is inhabited by 6% of India’s population, but has only 2.5% of India’s water resources. More than 95% of surface water and 80% of ground water have already been put into use. “Agriculture is the largest consumer of water using 75% of its water resources. Demand from other sectors like domestic and industries, have been growing significantly. The projected demand of water in 2050 has increased to 57,725 mcm,” notes the draft plan, and proposes to implement 10 projects at a cost of Rs 19,041 crore.

199 activities
The draft proposes to carry out 199 planned activities in seven key sectors by 2030. The voluminous document has been uploaded on the Department of Environment’s website 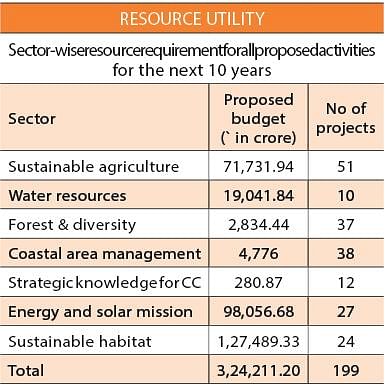