The grand old man of boxing

Taking forward his seniors’ legacy, A  Parthasarathy trains people across age groups amid the sun, sand and sea

CHENNAI: At 6.30 am, a group of people get together beside the skating rink near the Gandhi statue.They wear their boxing gloves and practice some punches in pairs. They are quick on their feet, have their guard up and are ready to strike. Behind them stands 82-year-old A Parthasarathy,  boxing coach at Santhome Boxing Club, chiming in with instructions.

Parthasarathy began boxing at the age of 14. He dropped out of school after class five. “My parents were farmers near Mahabalipuram. Due to financial constraints, I quit school,” he says. For two years he helped them till the land. “I was strong and liked exercising with my father,” he says. 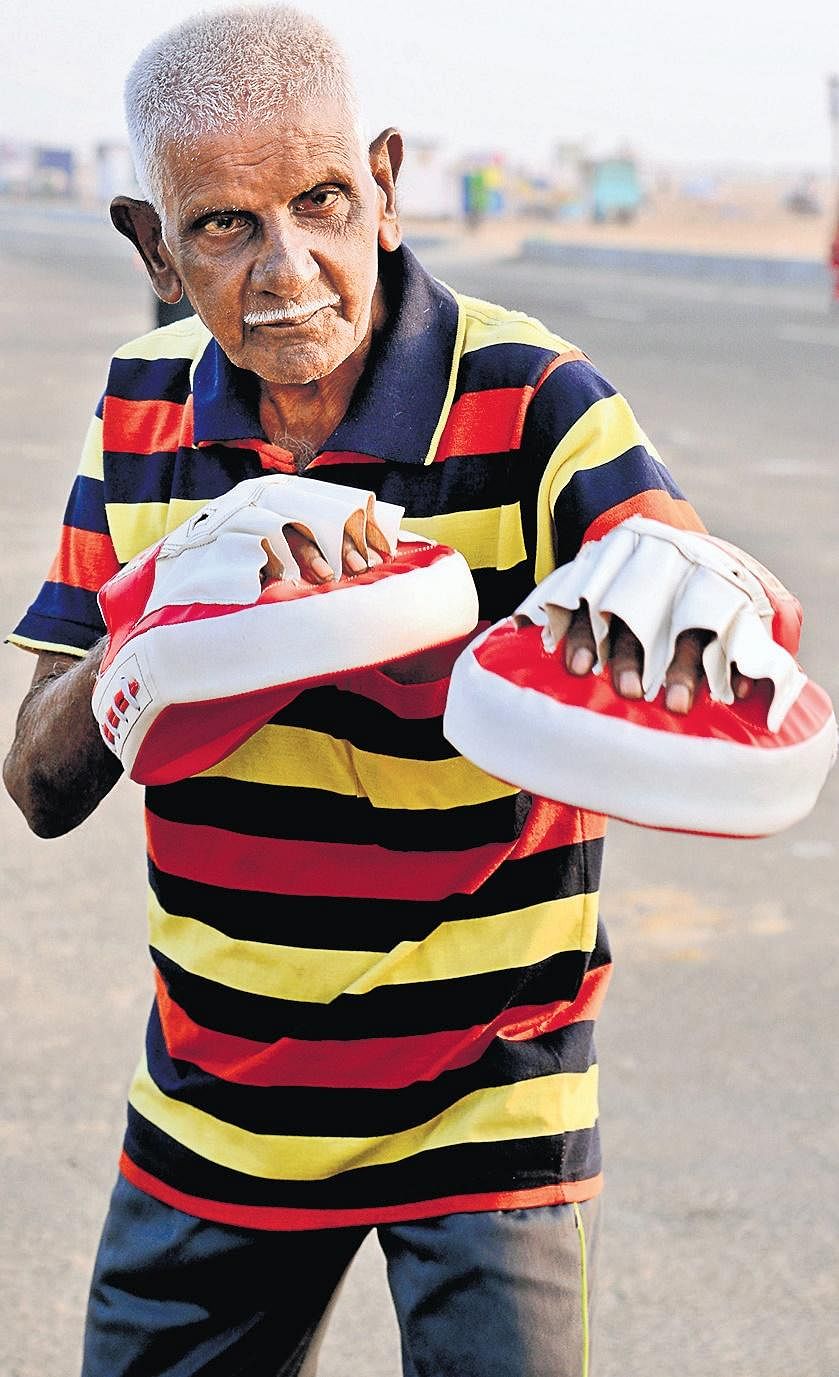 Fight club
One day, Parthasarathy got into a brawl with a few boys. “I was frustrated and swung my fists at them.  I got beaten up that day. My uncle saw the fight. He took me home and had a long talk with my father,” he recalls. His uncle was A Raja Chetty, a well-known boxer in Chennai. Chetty chose to give his nephew some direction. “He brought me to Chennai to train. He used to talk about boxing with so much passion, it made me want to box even more. He used to train boys and men, and I’d clean all the equipment, gloves and shoes, and train in the evenings,” he says.

Boxing was enjoyed by the British. Players were sponsored and bets were placed on them. “My first competitive match was just after independence but the British hadn’t left India entirely. The sport was doing well even among Indians. I was paid `10 when I won my first match; the rest of the proceedings were given to my sponsor,” he says.

Humble beginnings
Apart from Chetty, Parthasarathy also trained under Muggumadu Bhai, Mukesh Bhai and Jambu — stalwarts of their time. They laid the foundation of the Santhome Boxing Club. “They conducted training sessions at Marina beach and I continued the tradition. The rising sun builds resistance, sand builds muscle resilience and the sea helps you cool off,” he says. Parthasarathy, or ‘master’ to his students, trains children from nearby residential areas. “If they show interest in boxing, I can never turn a student down,” he says. Like his predecessors, Parthasarathy doesn’t charge children who cannot afford boxing equipment. “My older students sponsor them,” he says proudly.

In the late 1990’s, Parthasarathy caught a little girl of 12 spying on his training sessions. “Shruti was my first female student. She was passionate about boxing. She took down some of my best students,” he says. Ever since, he has encouraged more girls to join his classes. “Many were uncomfortable with training in the open because some of the local boys would stare. So, I took them to Nehru Stadium to train. I taught around 15 girls in one batch,” he says. Off late, children only come to train during their vacations. “Around 30 girls have already asked to be trained, this May. It is very important for ladies and girls to know how to defend themselves. In whatever short time they have, I teach them basic techniques that will help them with defence,” he adds.

Parthasarathy has been coaching for the last 50 years and even trained his six children. To support his family, he worked at TVS as a mechanic for 20 years and then as a night watchman at Santhome Church for the last decade. “Until my heart is beating, I will keep coaching,” he says.