As per the data, the noisiest place is Guindy, where decibel levels constantly clocked 76-77 dB during the day and 73-75 dB at night.

CHENNAI: Chennai is the noisiest metropolitan city in the country and violates decibel levels throughout the year, according to the latest Central Pollution Control Board (CPCB) data. The average noise levels during the day is 67.8 decibels (dB), much higher than Delhi that has recorded 61 decibels.

CPCB tracks noise-levels through continuous monitoring stations spread across seven major cities such as Delhi, Chennai, Bengaluru, Hyderabad, Kolkata, Lucknow and Mumbai. The board prepared its latest report after monitoring the cities every month in 2018. 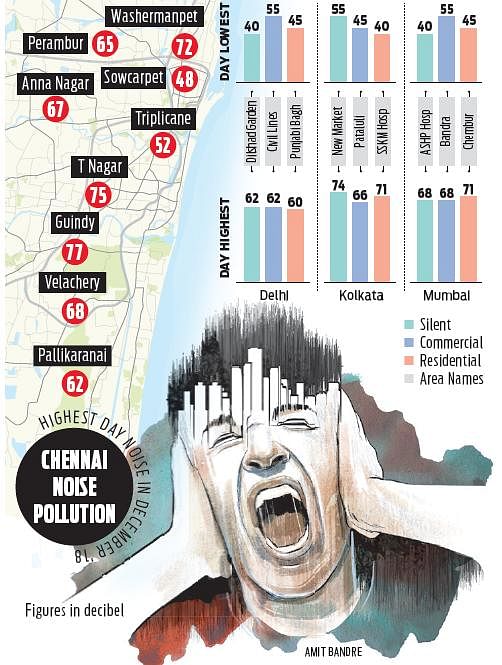 As per the data, the noisiest place is Guindy, where decibel levels constantly clocked 76-77 dB during the day and 73-75 dB at night. Among commercial areas monitored, T Nagar is the worst with noise levels remaining higher than standard limit all 12 months of the year.

Velachery, a residential area, has also recorded very high noise level as high at 81 dB during the day and night. Even a silent zone like Egmore Eye Hospital, where limit is 50 dB, recorded levels of 71 dB. Anna Nagar was also equally bad. While TNPCB monitors noise pollution levels, officials said the initiative to implement and ensure that silent zones remain noise-free rests with the local bodies and the police. However, when Express contacted Corporation officials, they pointed fingers at TNPCB.

Shweta Narayan, coordinator of Healthy Energy Initiative (India), told Express, “TNPCB should engage traffic police, transport department and other stakeholders to monitor pollution. In Chennai, honking is a huge issue and studies show that continuous exposure to high noise levels would lead to serious health issues.” Public health experts agree that environmental risks constitute 25 per cent of burden of disease. Epidemiological evidence indicates that those chronically exposed to high levels of environmental noise have an increased risk of heart diseases.

Now we are on Telegram too. Follow us for updates
TAGS
Noise Pollution Central Pollution Control Board