Rs 1.5 trillion to change how we travel

CHENNAI: In a major development, the CMDA has given its approval for the mega Rs 1.5 lakh crore Comprehensive Mobility Plan (CMP). Sources say the final draft has been cleared and sent to the government.

The CMP has drawn up the road map for transportation in Chennai city till 2048, and sources of investment in the short, medium, and long term. The CMP, sources say, lays stress on public transport to reduce pollution by the year 2048. Short-term proposals to this effect include: footpaths, cycle tracks, junction improvements, electric buses, pedestrian malls, area traffic control centres, smart signals, and grade separators.

In the medium-term, the CMP proposes building of road over bridges, multi-modal transit hubs, and bus terminals, while long-term proposals include satellite town ring roads, truck terminals, bus-based transit system, rail-based underground and elevated systems. Several departments will have to come together to execute the CMP. This includes, CMDA, Greater Chennai Corporation, Traffic Police Department, Southern Railway, MTC, NHAI, TNPCB, RTO, PWD, Smart City Limited, and Tamil Nadu Urban Infrastructure and Financial Services among others. Academicians and eminent colleges would be involved in studying mobility solutions for the city. To promote growth, the CMP proposes to have a Floor Space Index (FSI) of 2.5 along radial roads and proposed Metro Rail corridors, and an FSI of 4 along Outer Ring Road.

Four bus terminals?
Currently, there are two Inter State Bus Terminus (ISBT) for Chennai, one in Koyambedu and other in Madhavaram. The CMP proposes two more such facilities. One in Kilambakkam, near Vandalur, for buses going to Coimbatore, Salem and Madurai, and another in Tiruninravur for services to Bengaluru.

Many commercial projects likely in next 15 years in these areas

Along major mobility centres will enhance existing and proposed public transport systems, according to
the study.

Wide footpaths
Ideal width of 1.8m proposed for footpaths with a max height of 150mm from finished road surface. CMP has identified 1,358 km of roads where footpaths have to be built immediately 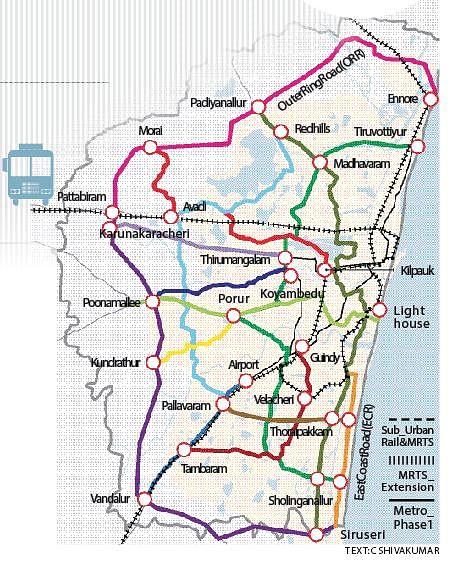