Curated for your canines

It was Danny, a two-year-old labrador’s birthday last week.

CHENNAI:  It was Danny, a two-year-old labrador’s birthday last week. He wagged his tail and barked in excitement seeing a bone-shaped cream cheesecake with chicken frosting. He sniffed, licked and relished every bite of it. All it took was this minute-long video of the dog enjoying his treat to make Uthra Ravikanth’s day — the one who baked the cake. This is just one among the many birthday videos that patrons flood her Facebook wall with.

Uthra started her journey as a home baker in 2012. While scouting for food options for her labrador Ginger, she realised that outside food did not suit him well. He developed allergies and it took a toll on his health. That became a turning point to try her hand at making sumptuous gourmet food and a variety of baked goodies for dogs. 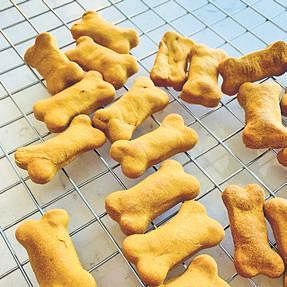 “Ginger’s overall health and energy level improved after I fed him with everything homemade. My social circle and friends also requested if I could make some for their pets. Then began the journey. I started baking exclusively for dogs under my brand Pawtastic from 2015,” said Uthra who works full-time as an executive assistant at a consultancy company.

Uthra also makes meat-based treats such as jerkies in chicken, beef, sardines and tuna. These are the crowd -pullers. Food is freshly made in her kitchen at Alwarpet every day and delivered. She curates a menu based on the age, health conditions and diet patterns of the dogs. During summer, she makes ice-creams in flavours such as blueberry. “I read about every ingredient that goes into the food. For instance, sardine is good for dogs. Tuna contains essential minerals and Omega-3 fatty acids. Blueberry is rich in antioxidants. Everything is checked with owners and prepared to keep the dog’s allergies in mind,” said Uthra.

Her desserts and pastries such as cakes, cupcakes, fluff balls and truffles are an instant hit. The base of her cake is usually vanilla, carrot or banana. The frosting options include cheese, carrot and peanut butter. She’s already booked for two birthdays for January. Tweaking recipes to choose a dog’s palate has garnered her following from patrons around the city. She also bakes gluten-free cakes.Uthra often travels for work. Her team and her mother run the show in her absence. She’s planning to enrol in online courses to study dog training and nutrition from Dogma Academy, an online platform, in February. She takes a day or two to bake and delivers across the city.For details, visit Facebook or Instagram page: Pawtastic, or call: 8939254425