State received 453.5 mm of rainfall as against the normal 445.7 mm, despite Bay of Bengal remaining subdued with zero cyclones or depressions

CHENNAI: Meteorological department has announced that Northeast monsoon will withdraw from Tamil Nadu on Friday. After a couple of consecutive intense cyclonic seasons, this monsoon remained calm while delivering bountiful rain. The State received 453.5 mm as against the normal 445.7 mm, which is two per cent excess. However, Chennai received below normal rainfall with 16 per cent deficit. Statistically, data is calculated from October 1 to December 31.

On an average, Bay of Bengal springs at least two cyclones during monsoon. However, this year, it remained subdued with zero cyclones/depressions, but still helped State stock enough water to tide over the upcoming summer.Roxy Mathew Koll from Indian Institute of Tropical Meteorology (IITM) told Express, “Arabian Sea temperatures during 2019 was warmer than usual, partially due to Indian Ocean Dipole (IOD) effect and rising temperatures owing to global warming. 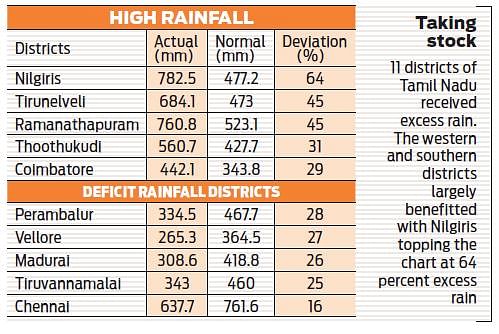 Overall, 11 districts of Tamil Nadu received excess rain. Largely, Western and Southern districts benefited with The Nilgiris topping the chart receiving 64 per cent excess rain followed by Tirunelveli and Ramanathapuram with 45 per cent excess. Cyclones draw their energy from the heat exchanged from the ocean surface. So, warmer temperatures are generally favourable for more, intense cyclones

Stay up to date on all the latest Chennai news with The New Indian Express App. Download now
TAGS
monsoon