Did Jaws, India’s biggest crocodile in captivity, die of stress?

CHENNAI: Did stress from the increasing noise pollution do in Jaws, India’s biggest crocodile in captivity, at the Madras Crocodile Bank? The 500-kg weighing reptile who even allowed visitors to hand feed him is no more, and would soon be replaced by Thor for ‘the show on the road’. Jaws died on Monday morning and the necropsy results are awaited. An official from the crocodile bank official said, “Necropsy results will tell us more, but his age is definitely a factor. He had been largely disinterested in food since May in spite of us offering him goat and fish. He was getting weaker and weaker. Over 50 years of age is a ripe age for a croc and we were preparing for the worst; but still we hoped he would pull out of this slump and start eating again.”

The croc bank founder, Romulus Earl Whitaker, did not rule out stress being a factor. “I had visited Jaws a week ago and he was looking weak. We have to wait for the report to come to any conclusion, but I do feel stress from increasing noise pollution in the neighbourhood took its toll.” 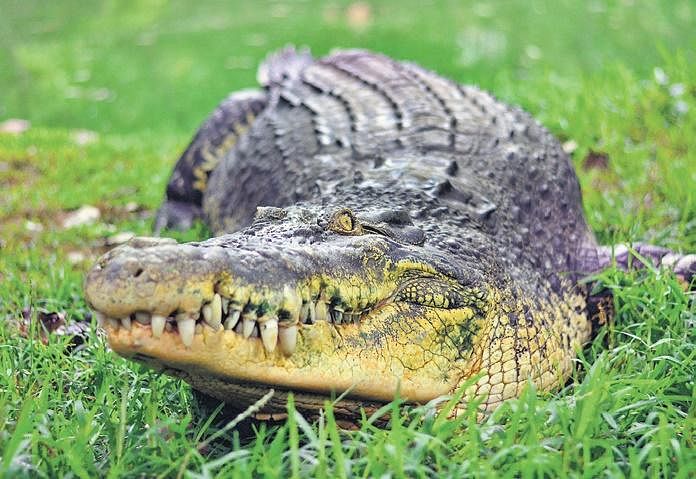 The crocodile bank has been constantly raising concerns over noise pollution. “On New Year morning, at 6.50 am, a volley of crackers were burst nearby and lot of cracker debris fell right in the centre of the crocodile bank. Thankfully it had rained hard the night before. What if it was during one of the long dry spells that are becoming increasingly common?”, the croc bank, which houses over 1,800 reptiles, said in a Facebook post. Whitaker says crocodiles are as friendly and intelligent as dogs, contrary to general perception.

“Despite weighing 500 kgs, Jaws would allow humans to hand feed him.” Jaws was brought to the croc bank as a juvenile, and grew to become the biggest croc in captivity in India (4.69 metres). As he grew larger, he became less tolerant of other crocodiles and at that size, was capable of inflicting harm; so he was moved to a solitary pen.

The ‘Jaws Show’ on Sunday afternoons had became a popular part of Croc Bank tour, as he allowed visitors to approach him. He usually ate 2-3 kg of meat (usually chicken) and swam up and down in his private pond in response to the keepers’ calls. Large crocodiles eat surprisingly less because their energy conversion ratio is high. Seeing him lunge out of water and grab the chunk of meat was always an exciting sight. Sometimes he would stretch out on the bank for a morning or afternoon bask, much to the delight of visitors. Anyone who had met Jaws would never forget his sheer bulk and length. The croc bank official added that the ‘show on the road’ will feature Thor, a large saltie, from now. Thor is comparatively younger and weighs 350 kg.