Honey, who shrunk our forests?

As the debate on ease of business vs conservation continues to rage, Naaz Ghani looks at six protected areas across India, where our lust for development has crushed the environment and its laws.

CHENNAI: A popular excursion site for school students, home to over 150 species of birds, 350 species of plants, 60 kinds of butterflies, and the endangered blackbuck — the Guindy National Park (GNP) has for long been the green lung of the city.

But this pride is crumbling, thanks to botched decisionmaking and the deliberate arrogance towards the environmental impact of not declaring the park as an Eco-Sensitive Zone (ESZ). Nestled in the proximity of the Raj Bhavan and IIT-Madras, the park is a critical corridor for the resident wildlife to move in its habitat. But construction activities in the neighbourhood, and the absence of a buffer zone have threatened the park's survival.

Sadly, GNP is not alone in this battle against development where profits over planet, and business over biodiversity seem to be the obvious choices. ESZs across India are dying a slow death, and the recent EIA notification draft, which favours industrial and corporate projects, has only made matters worse. Even as recent as June of this year, in the middle of a nation-wide lockdown, the Central government launched auctions for 41 coal blocks in five states, of which 14 projects are in ESZs. Thousands of protesters and activists have taken to Twitter urging effective and immediate action to stop this murder. Can we save India's last breath?

Park faces survival threat owing to traffic congestion given its proximity to IIT(M) and Raj Bhavan, and absence of ESZ.

Unregulated construction has led to habitat loss, and increased the human-animal conflict in the area.

Water & air pollution evident because of the proximity to human settlements.

Once a sanctuary for the blackbuck, the national park had recorded a population of 400 blackbucks in 2006. The number dwindled to 31 in 2019.

The decline can be pinpointed to the absence of an ESZ and the overuse of protected areas for infrastructure.

WHAT IS AN ESZ?

An Eco-Sensitive Zone is not a protected area. It is a shock absorber for a protected area. Wetlands,
bordering forests and waterbodies regulate and purify the air and water contaminated by humans, and make them suitable for wildlife in the area.

The National Board for Wildlife (NBWL) met in 2002 to set the guidelines for ESZs in India. In 2005, in another meeting, the NBWL decided that ESZs will be delineated specific to the site of the
protected area. Activities on ESZ land will have to be regulated instead of being prohibited.

It was an instruction to ensure that the respective departments in each state adhered to the set guidelines.

In the case where sensitive corridors, connectivity and ecologically important patches that are crucial for
landscape linkage, are even beyond 10km of the protected area, then these should be included in the ESZ.

The SC also directed that all cases, which required environmental clearances within the ESZ will have
to be referred to the standing committee of the NBWL.

The most recent attempt to breach a designated ESZ was at the Vedanthangal Bird Sanctuary in Tamil Nadu. The ESZ was proposed to be reduced from the existing five kilometres to three km.

SECTION 5(1)
of the Environment (Protection) Rules (EPR) 1986 states that the Central government can prohibit or restrict the location of industries and certain operations or processes based on considerations like the biological diversity of an area, environmentally compatible land and the proximity to protected areas.

Around 110
tribal villages in the vicinity carried out protests to quash the proposal.

The decision was further transferred to the SC, which delivered its verdict in 2013.

The apex court directed that clearances would be given after the village councils in the area submitted a vote to either allow or stop the project.

1.Two tribes — the Kutia Kundh and the Dongria Kundh — actively protested. They believe that their god Niyam Raja resides in these sacred hills.
2. An initial proposal submitted for clearances in 2010 was rejected by the Union Environment Ministry
on the basis that the opinion of local residents had not been taken into consideration.

EIGHT OF THE 12 VILLAGE TRIBAL HEADS,

SELECTED BY THE GOVERNMENT, VOTED AGAINST GIVING A CLEARANCE.

The OMC had reapplied for a plea to conduct a second round of voting in 2016, which was rejected.

The area is still under threat as Vedanta and OMC now source their bauxite from mines in Lanjigarh, a village close to the proposed mining site.

The illegal mining activities are the root cause of a layer of ‘Red Mud’, a byproduct of mining bauxite, to cause the ecology to change with many wild animals abandoning their ruined habitats. 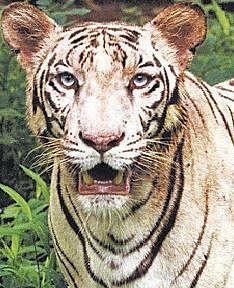 The endangered Gir Lion has been under threat since 2010. Illegal limestone mining practices have disturbed parts of the reserve, causing major habitat destruction and a decrease in the size of hunting grounds. A movement started by activist Amit Jethwa, the fight to protect the sanctuary and its ecology within, continues to this day.

Amit Jethwa was shot dead over the matter in 2011. NGOs and local tribes have taken up the task to keep the fight alive.

24 LIONS HAVE LOST LIVES.
The lions are sickly due to inbreeding because of habitat loss.

Hardly four prides of lions can claim territory within the sanctuary.

Overlapping boundaries have caused them to kill each other over territory.

As mining work increases, the land decreases and so does the population of lion prides and their territories

In 2016, the MoEFCC declared an ESZ around the Sanjay Gandhi National Park, which sprawls into the cities of Thane & Mumbai.

Parts of the Aarey forest too come under this declared ESZ.

The ESZ varied from 100 metres to four kilometres.

Despite being declared an ESZ, in the final draft of the notification, the MoEFCC removed the clause that mentioned a ban on construction within a one-kilometre radius of the protected area.

The final draft also excluded around 165 hectares area from Aarey colony, which was otherwise included in the declared ESZ.

JANUARY 2016: An NGO called Vanashakti challenged the excluded clause and took it up with the National Green Tribunal (NGT).

OCTOBER 2019: The Brihanmumbai Municipal Corporation ordered the felling of around 2,500 trees in the Aarey forest, to clear the land for the construction of a Metro shed.

OCTOBER 2019: The NGT asked the MoEFCC to explain how the demarcation of the ESZ had been done and why 165 hectares had been excluded. The ministry submitted its reply in December 2019.

JANUARY 2020: The NGT dismissed plea and excluded disputed land from the ESZ. It is suspected that the Aarey forest was excluded from final notification to give way to construction and infrastructure
projects in the area.

JUNE 20, 2020: The SC dismissed Vanashakti’s forwarded plea on the grounds that no evidence was
found to invoke an interference in the final order of the NGT. The plea was dismissed in the absence of both parties.

The Maharashtra government cleared 25 hectares of the 165 for the Metro shed project.

The government also earmarked 90 hectares to be used for the rehabilitation of slum dwellers and tribals in the vicinity of the Sanjay Gandhi National Park.

Loss of habitat due to the felling of trees drove wildlife into urban spaces, increasing the humananimal conflict in nearby areas.

Despite a massive uproar from citizens to stop the encroachments in the Aarey forest, all voices were ignored or silenced.

The sanctuary is Asia’s largest nesting ground for the Phoenicopterus flamingo species. It is the only regular breeding site of flamingos in the country. Offers appropriate conditions for mating.

In 2014, the then newly appointed members of the NBWL gave clearances for a road construction project that cuts right through the sanctuary.

The road was also expected to destroy a part of the Shravan Kavadia mangrove system, which is one of its kind and sacred to many communities in Gujarat. This was done even though the previous committee had rejected the proposal as the construction would lead to the abandonment of the breeding and nesting grounds by the flamingos.

The road was also expected to destroy a part of the Shravan Kavadia mangrove system, which is one of its kind and sacred to many communities in Gujarat.

The move was predicted to adversely affect the population of these birds in the country.

A study was done on the nesting spaces of the flamingos in 2013, upon whose data the former NBWL
had rejected the proposal.

Now we are on Telegram too. Follow us for updates
TAGS
Guindy National Park environment forests