Much is being done to understand the coronavirus that has endangered the lives of millions around the globe — its origin, its effects and of course, its possible extraction.

CHENNAI : Much is being done to understand the coronavirus that has endangered the lives of millions around the globe — its origin, its effects and of course, its possible extraction. Although this is the first time we have faced a threat of this magnitude, this isn’t the first we have seen of its kind. Of the large family of coronaviruses, there are seven that can infect humans. One strand from the seven, the 2019-nCOV, is also the cause of a zoonotic disease.

A list of viruses, bacteria, fungi and parasites that can transfer diseases between humans and animals is called zoonotic diseases. The Severe Acute Respiratory Syndrome (SARS) outbreak in 2003, the swine flu and the chikungunya outbreak in 2015 were all spread by zoonotic viruses. The most commonly recurring zoonotic disease in India although, is rabies. 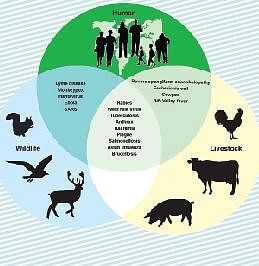 Transmission of rabies generally takes place through dogs and bats. It is rare for a zoonotic disease to be transmitted between humans, but some have been known to mutate to become a human-only disease. An example of this is the HIV virus, which was transmitted to humans in the early 20th century by primates and then mutated to affect only humans now. Dr KA Subramanian, scientist-D and officer-in-charge, Zoological Survey of India, tells us of five rare zoonotic diseases that have spread in clusters in India.

The first documented case of the tick-borne disease was in 1957, near the Kyasanur forest in Karnataka. It was observed that many non-human primates, specifically the black faced langur, were also affected by the virus in the tick. In 2012, the disease broke out in two taluks of the Shivamogga district. There were around 176 suspected cases and around 38 confirmed infected. The symptoms were high fever, chills, headache, muscle pains, vomiting, etc. The disease was also found to be carried by rodents and a few birds as well.

Kerala faced the worst effects of the Nipah virus. Three outbreaks — in 2001, 2007 and 2018 — claimed the lives of 17 people in the state. There were 19 confirmed cases. A member of the genus flavivirus, the Nipah virus is transmitted through fruit bats, also known as megabats. Although the death toll is small, Nipah is transmittable between humans as well. Quick steps taken by the Kerala government curbed the number of casualties. The disease has distinctly surfaced in the Eastern parts of India as well.

The first case of Japanese Encephalitis in India was from the North Arcot district of Tamil Nadu in 1955. Although the first outbreak took place in 1973 in two districts of West Bengal. Ever since, we have seen multiple outbreaks in Uttar Pradesh and Assam as well. An outbreak in Bihar, last year, claimed the lives of 150 children. Most often, cases of Japanese Encephalitis are mild. Other times, it may cause brain swelling which triggers headaches, high fever and disorientation. The only known cure is a vaccine.

The Hantavirus has made two most notable appearances in the country. One in 2012, where it claimed the lives of ten people and then in 2017 where 17 people were affected across seven states. It is non-transferable between humans and hence was contained favourably. Recently, a man was found infected in China. It travels through particles of rodent urine, saliva or droppings that are mixed in the air. Those infected had been exposed to infected rodents. Early detection is key to recovery, but symptoms of the virus are common to those of common cold, migraine and flu, making it hard to detect early.