No reprieve for Sri Lankan refugees

After spending a few years in the Mandapam transit camp, near Rameshwaram, the family made its way to Chennai to rebuild their lives from scratch.

CHENNAI: During the wee hours of March 30, 1987, 10-year-old Malarmagal, waited in anticipation to welcome her father, who had been away for several days, getting treated for an ailment at a local hospital in Jaffna, Sri Lanka. A few minutes past 5.50 am, Malar could hear a thunderous sound tearing through the morning silence. “My elder brother, who was asleep, winced. My heart sank. My mother held her breath. By 7 am, the news reached us. The hospital had been attacked by militants and the bombing had claimed the lives of many, including appa’s. Udal sedhanju appa veettuku vandhange (My father’s corpse reached home, completely obliterated),” recalls Malar.

Three years later, amid the unrest caused by the civil war, a spate of violence and riots, and constant fear for safety, Malar’s mother Kamalambal decided to flee war-torn Sri Lanka along with her two children. “It was a journey that’ll never be erased from my memory. I was 13...I remember walking through treacherous forests for many kilometres, taking multiple boats, halting in the unlikeliest of places and most importantly, living in fear,” narrates the 43-year-old, who landed on the shores of Tamil Nadu in July 1990 — seven years after the Black July riots that set off the Sri Lankan Civil War. After spending a few years in the Mandapam transit camp, near Rameshwaram, the family made its way to Chennai to rebuild their lives from scratch. “I joined an NGO in Egmore, studied class 10 through a tutorial school and worked part-time. I remember my first salary was `650. Since then, I have been the breadwinner of my family. I also went on to complete diploma courses in fashion designing, beauty and make-up and that’s my full-time profession now,” shares Malar, one of the one lakh Sri Lankan Tamils living as refugees in and outside of camps in the state.

Having spent a large slice of her life fighting uncertainties, nightmares of her past and a lack of identity, Malar thought she had seen it all. “That was until the coronavirus outbreak. For over two decades, we have been trying to build a livelihood for ourselves with limited aid and opportunities. A lot of people like me were largely dependent on the foreigners who used to visit the city for weddings, other occasions and tourism. From arranging guest houses and lodging; taking care of catering, video and mandapam arrangements; clothing and make-up to acting as guides, our jobs used to cover the whole spectrum.

Now with the travel ban, our livelihoods have been strained. Most Lankan Tamils living outside of camps are struggling to pay house rents and some can’t afford food and medical essentials,” rues the resident of Valasaravakkam, who along with Sivapuram Charitable Trust has been working towards appealing to the government to provide citizenship and immediate remedies for those in distress — both in and outside camps. “For those living outside, the lack of ration cards and other vital identification proofs have been a cause of concern. One cannot avail of even government relief packages without it,” she explains.

Looking for sustenance
For Sujatha, who lost her husband during the riots, Chennai, has become her home. The former nurse taught herself the art of tailoring and has been taking up garment stitching works on an order basis for the past decade. But now, the virus has stymied the job opportunities for many like Sujatha. “The orders we received from foreign clientele used to be our primary source of income. I used to earn anything between Rs 10,000 to Rs 15,000 a month — enough for the rent and my day-to-day expenses. Now, the virus has jolted our lives. Since the pandemic has affected everyone, even those kith and kin who used to help us from other parts of the world have had to be close-fisted with the money,” shares the non-camp refugee.

Mahendran*, who had been driving an Ola cab on a rent-basis, has been home without a job for the past three-odd months after having to surrender the vehicle to the cab aggregator. “I have had nothing to do in these months. We received some essential supplies and rations from a few NGOs working for the welfare of refugees. It will last us for another month. But with no permanent source of income, how long can we go? As it is, it has been tough to get any job, procure assets or avail of loans without citizenship. We only have an Aadhaar card for identity,” says the father of two, who made his way from the island nation to Batlagundu camp in Dindigul district,  along with his family in 1990. 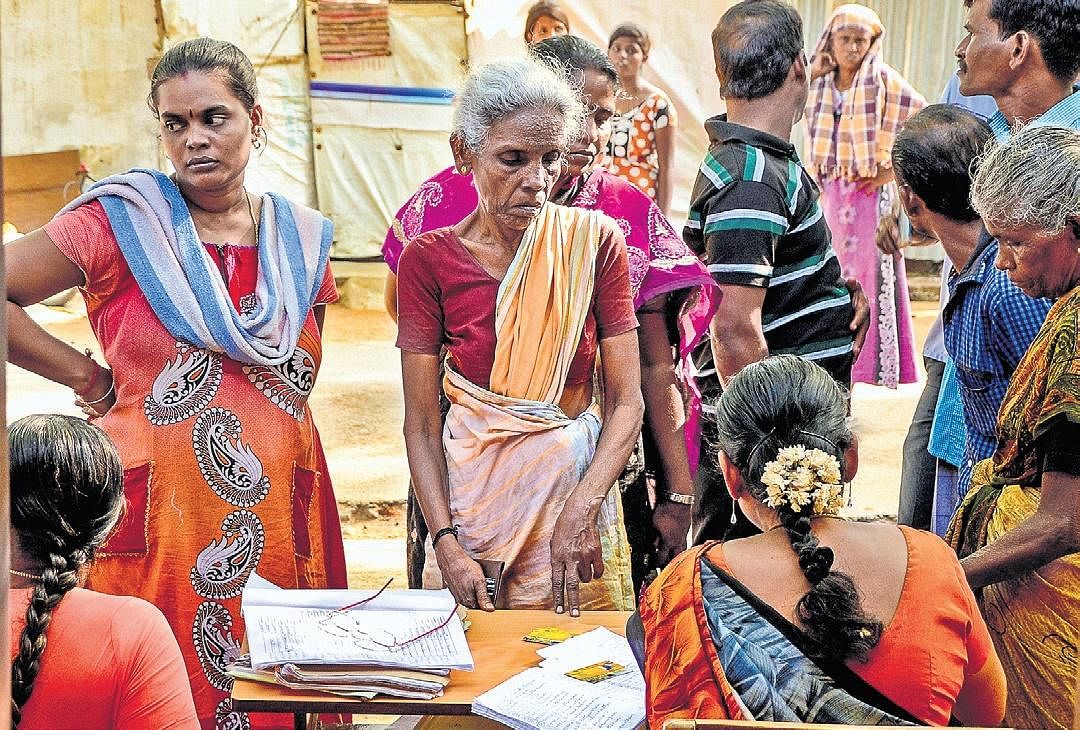 The glimpses of war and its consequences — of bombs going off around them, reaching the Gulf of Mannar, getting vaccine injections on arrival and being transferred to numerous camps — are still fresh in his memory. “My father and mother were farmers. They somehow managed to pay the money (`4,000 per head) to put the whole family — including my seven siblings — on a boat that would take us to a ‘land of freedom’. After almost a week of travelling through forests and the sea, we reached the Batalgundu camp. I got married here in Tamil Nadu and now have two children. They have no idea of how Lanka looks like. It’s been 30 years since I came here. Innum evalo naal agadhigala vazharadhu? (How long can we live as refugees?),” he asks.

But with an income deficit prompted by the virus, and the future prospects and education opportunities for his children seemingly bleak, Mahendran says he would go back to his “second home” if given a chance. “We have no money to pay for our house rent. The schools have issued the challan for fee payment. In this situation, it looks like going back to Lanka is a better option. My mother-in-law lives there; at least, we won’t have to worry about rent and other expenses. I can work in our farm...where my father ploughed. But travelling too comes with its own set of issues. For refugees, acquiring travel papers is a process too,” he says.

Fears & concerns
As Malarmagal, Sujatha and Mahendran paint a picture of the prevailing conditions of the 30,000-odd refugees living outside, a few who have been living in the congested lanes and closely located 10×10 homes within camps list the concerns plaguing the 60,000-odd refugees sharing this fate. Common toilets, shared house walls, hand pumps used by multiple people, lack of basic supplies and challenges involving physical isolation have been some of the major concerns, details Mageswari*, a single mother to three children, who has been living in the Valavanthankottai refugee camp in Tiruchy. “My husband passed away a few years ago and I have been living here for almost 30 years.

The camp is disinfected with chlorine powder once or twice a month. But since the houses in the camps have been built in such a way that there is not a lot of space for distancing, families with senior citizens and children are concerned about a looming threat. If anyone in the camp contracts the virus, it will easily spread to everyone. We don’t have masks or gloves either. All we can do is keep our surroundings clean and safe,” says the 42-year-old, who sells nighties for a living. “There’s no business now. And we are uncertain about how the future will look. But since we are registered members, we do get the provisions from the government,” she shares.

Living in mortal fear, Saravanan*, a resident of a camp in Vellore, says that he feels “stuck”. “From the outside, it may look like we are complaining about our life. But, we have survived a war and are living a refugee life. After all the struggle, I don’t want to lose my life because of a virus. We ask for citizenship, we ask for help to improve our conditions during the pandemic. The virus is a potential danger and we want regular medical check-ups and screenings in the camps. There are refugee families living in unimaginable conditions...this includes living in a godown space,” he shares.

Doing their bit
Though a common thread of fear and concern prevails, refugees at several camps have also stepped in to lend a hand to their ilk by setting up action committees. From distributing kabasura kudineer, pooling money to improve their conditions, creating awareness videos to teaching the residents about the importance of social distancing and sanitisation, refugees in camps like Madurai and Thoothukudi, among others, are paving a new way for the 18, 000-odd families living in the camps. “We are being given provisions by the government. Indha naadu engale vazha vechiruku (This state has helped us live). We should do our bit by helping ourselves and the community.

But the government needs to step in too,” says Suresh*, a camp resident of Okkur in Sivagangai, adding that funds are also being pooled in by those who can contribute for relief funds. “Most of us are painters and daily-wage labourers but we still try to contribute,” he adds. A coordinator at the Organisation for Eelam Refugees’ Rehabilitation tells CE that around five residents from different facilities, including the camp in Virudhunagar, Anaiyur and Thiruvannamalai, who tested positive for COVID-19 were cured after early intervention.

“Since many refugees returned to the camps from different parts of the state after losing their jobs, there was a scare of spread. The camps are being disinfected regularly and our healthcare volunteers are keeping an eye on the works round the clock. We are also in talks for distributing masks to the refugees in all the camps. The government has also been taking a special interest because if there’s a spread in the camps, it cannot be easily contained,” says the coordinator of OfERR.

Since the end of the civil war in 2009, over 10,000 refugees have already made their way back to the politically simmering country. But for many like Malarmagal, despite their displaced lives, dismissed pleas of citizenship and fear of deportation looming large, their hearts and home are in Tamizh Nadu. “My mother is now 74 and people here take care of her as their own. We have been given a second chance here and I will always be grateful for it. All I ask is this — while the government has many other priorities, some focus on our requirements will help us. We are tired of battling wars and running from them. Now a pandemic has waged another war. Where do we flee?” asks Malarmagal. *Names changed

Helping themselves
Despite the bleak order of things, residents of several refugee camps have taken things into their own hands — arranging kabasura kudineer, creating awareness about social distancing and sanitisation, and even going so far as contributing as much as they can for relief funds.

For Sri Lankan Tamils who had to escape a war and its consequences, a virus now stands in their way — threatening the safety of their still makeshift homes, and destroying their livelihoods. Despite the dangers, relief is nowhere in sight.

Now we are on Telegram too. Follow us for updates
TAGS
Sri Lankan Tamils Sri Lankan refugees