With Chennai's COVID positivity rate at 25%, experts say testing needs to be ramped up

CHENNAI: Even as Covid cases in the city continues to spike up rapidly, testing has remained stagnant, reveals data from Greater Chennai Corporation (GCC). A simple comparison of details shows, while the total positivity rate in the city jumped by a whopping 19.35% from May 1 to June 19, the number of samples being tested increased only by about 2,000. 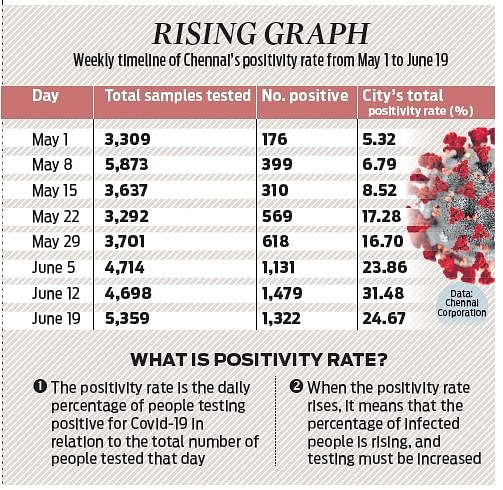 Experts opined that increased testing is a must in this scenario. “More the people we test, more cases will be detected. Eventually, there will be fewer people with the infection, thus bringing down the transmission,” said Prabhdeep Kaur, Deputy Director of National Institute of Epidemiology.

She added, “The higher testing rate in other districts could be due to many reasons. However, congested areas in Chennai needed more testing.”

Infectious diseases expert Dr V Ramasubramanian of Apollo Hospitals echoed the sentiment. “More people we track and isolate, lesser the transmission rate. Chennai should be the epicentre of testing,’’ he said, adding that testing should increase with rising number of cases.

Whom to test?
Kaur stressed on focussing resources on family contacts, symptomatic extended contacts, and frontline workers. “A large proportion of cases come from less than 25 per cent of the streets. Thus, narrowing down on such streets with most cases and testing people there, is vital to contain the spread,’’ she added.

"Chennai Corporation is gearing up to do 10,000 tests a day which will be a good target. Five per cent or below is a good positivity rate," Dr Kaur said.

She said that the city could have done 10,000 tests in May but it is still not late to ramp up the testing. "We can still catch up and slow down the epidemic," she added.

While the data highlights that districts with low cases have been prioritised with higher testing rate, experts believe that testing the wrong people may lead to wastage of resources.

Virologist Dr Jacob John said, “Low oxygen levels, loss of taste and smell could be the primary indicators of Covid-19. Such cases in rural areas could be picked up even without RT-PCR tests.”

He added that swab tests have a six per cent chance of producing false-negative results.

However, he pointed out, “High positivity rate indicates we are testing the right people. We need to continue this focussed and clinical testing.’’