1,890 with travel history quarantined in Chennai

Teynampet and Adyar zones of the city corporation have the highest number of people quarantined in their houses, according to data available with the civic body.

CHENNAI: Teynampet and Adyar zones of the city corporation have the highest number of people quarantined in their houses, according to data available with the civic body.

Mapped against the Teynampet zone’s population of around 8 lakhs, the Thiru Vi Ka Nagar zone with around the same population has only 88 cases. In the Adyar zone, 293 people are quarantined.

However, those quarantined are not symptomatic so far, said corporation officials and that have been quarantined only on the basis of their travel history to Corona-affected countries after they were screened at the airport. “These are simply precautionary measures. These people don’t have symptoms,” said a senior corporation official. 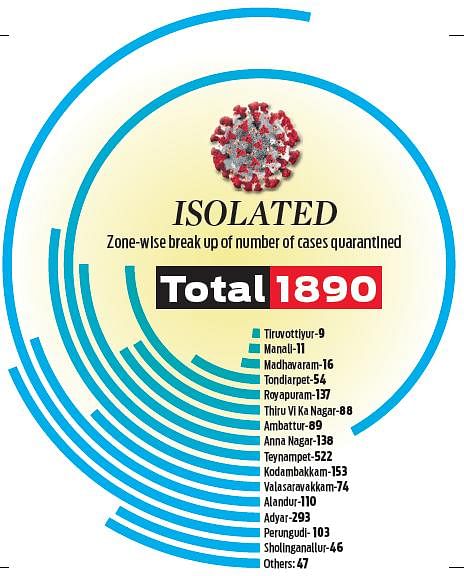 In the Northern zones of the city which comprises of Thiruvottiyur, Manali, Madhavaram, Tondiarpet and Royapuram with a combined population of around 20 lakhs, a total of 227 people have been quarantined.

While the number may not be high, in the unfortunate event of it going up, house quarantining would prove ineffective in the region owing to the closely packed houses and dense population, say health experts.

A senior health department official told Express, “It is true that in such cases house quarantining would be ineffective. But for now, there are not many people from the North region who have had a travel history to affected countries, as far as we’ve seen. So it is not likely that such a situation would arise.”

Keeping in mind that the symptoms may show up after the screening at airports and now, railway stations, corporation officials have launched a door-to-door operation to scan households for symptoms of COVID-19.

Under this, the city corporation’s DBC (Domestic Breeding Checkers) workers would visit each house and verbally take note of symptoms including fever and cough. “Our health and medical officers would then use the data and analyse it for trends. Based on that, interventions would be done,” said Corporation Commissioner G Prakash.

Now we are on Telegram too. Follow us for updates
TAGS
chennai Chennai coronavirus Chennai quarantined Coronavirus COVID 19